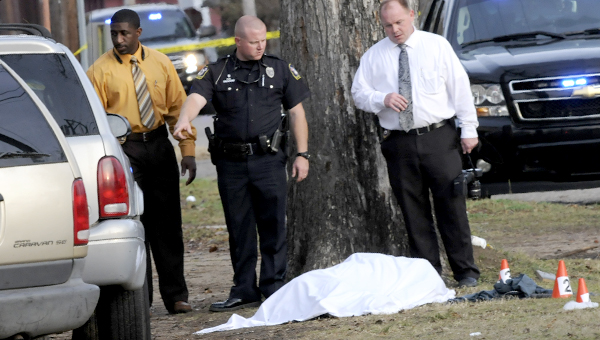 Investigators with the Selma Police Department and the Alabama Bureau of Investigation review the scene Wednesday afternoon where a suspect, wielding a hatchet, was shot and killed by Selma Police. — Josh Bergeron

A Selma police officer shot and killed a hatchet-wielding, middle-aged man on Griffin Avenue Wednesday after responding to a disturbance call.

Selma Chief of Police William Riley said police were called to Church’s Chicken on Broad Street at 2:19 p.m. after receiving a disturbance call. Once on the scene, officers found the man in an abandoned building at the intersection of Washington Street and Griffin Avenue, Riley said.

Riley said he wasn’t able to provide the name of the victim or the police officer involved. The case was immediately turned over to the Alabama Bureau of Investigation for further review.

The officer who shot the unidentified man will be placed on paid administrative leave while the Alabama Bureau of Investigation reviews the incident, Riley said. The police officer will also be provided counseling.

Riley said the officer was protecting himself in the shooting.

“Nobody wants to see a loss of life, but, however, in this line of business — law enforcement — this may happen,” he said. “Our officers are trained to protect themselves as well as the public and in this particular case an officer was approached by an individual with a hatchet and when the individual came at the officer, the officer discharged his firearm.”