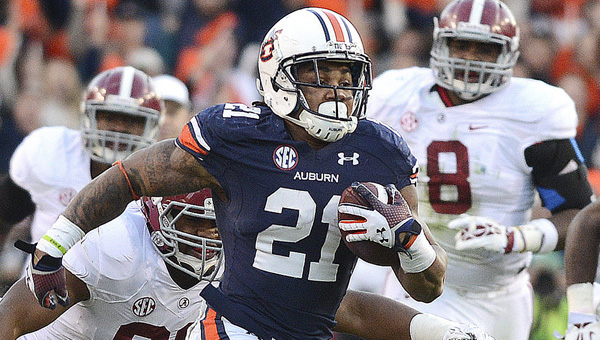 AUBURN — Alabama’s push for a third straight national championship likely ended in the wildest possible way, but it felt just right for Auburn.

Two weeks after beating Georgia on a miraculous fourth-and-18, 73-yard touchdown pass, the No. 4 Tigers upset No. 1 Alabama on Chris Davis’ 109-yard return of a missed field goal for a touchdown as time expired.

After Auburn had tied the game at 28 on Nick Marshall’s touchdown pass to Sammie Coates with 32 seconds left, Alabama had driven the ball to the Auburn 44-yard-line and there was :01 left to play.

Nick Saban sent out  kicker Adam Griffith instead of an inaccurate Cade Foster to attempt a game winning 57-yard field goal and when the attempt fell short, Davis caught it with his foot just inches from touching the back of the end zone.

Davis fielded the ball and found blockers down the home sideline. All of a sudden, a lane opened up and Davis saw daylight, running into the end zone as time expired for one of the greatest finishes in Iron Bowl history.

The win secured the SEC West for Auburn, meaning the Tigers will meet Missouri in the SEC Championship game in Atlanta next week.  If all the pieces fall into place, Auburn could also play for the national championship. The Tigers would need to win the SEC and jump Florida State or Ohio State or have the Seminoles lose to Duke or the Buckeyes lose to Michigan State in the team’s upcoming conference championship games.

“That’s what you coach for, that’s what these kids play for, to get a chance to win the SEC championship,” Auburn head coach Gus Malzahn said.

After Auburn had rallied from a 21-7 second quarter deficit, the Tigers had all of the momentum in the game, but Alabama’s Heisman candidate — quarterback A. J. McCarron — had steadied the Crimson Tide and had his team in front while making a little history.

After a perfectly placed Auburn punt that pinned Alabama at their own 1-yard-line, McCarron threw a 99-yard touchdown pass to wide receiver Amari Cooper that quickly deflated the crowd at Jordan-Hare Stadium.

But, the crowd wouldn’t stay quiet for long.

After getting an Auburn stop, Saban elected to go for it on fourth-and-inches at the Auburn 13 instead of sending Foster out for a field goal attempt. T.J. Yeldon was stuffed short and Auburn took over with 5:34 left to play in the game. The Tigers were still forced to punt again, and held Alabama to a third Foster field goal attempt, which was blocked.

Auburn got the ball back with three timeouts and 2:32 on the clock, which was plenty of time for a rushing attack that racked up 296 yards on the day.

Marshall handed off to Tre Mason six straight times, but with under a minute left, it was Marshall’s arm that made the big play.

After faking a read option handoff to Mason, Marshall threw a 39-yard touchdown pass to a wide open Sammie Coates with 32 seconds left in the game to even the score at 28.

Alabama still had two timeouts and the Crimson Tide elected to stay aggressive instead of taking a knee to send the game to overtime. After two T. J. Yeldon runs for big gains, Alabama was at the Auburn 39-yard line, and time had run out and the game was set to go to overtime.

But, a review showed that Yeldon had stepped out of bounds with :01 left to play on his second big run and Alabama sent out Griffith to try the field goal for the win. But, instead Auburn got the win after Davis’ return touchdown sealed the deal for the Tigers and sent Auburn fans storming the field.

“It was a great game,” McCarron said. “Sometimes luck just isn’t on your side.

“It’s one of those crazy plays. It’s almost like a video game. That’s something you do on Madden or NCAA. It’s just a wild play.”

Alabama started the game with a 34-yard rush by Yeldon, but the drive stalled and Foster missed a 44-yard field goal attempt, a sign of things to come.

On the ensuing drive, Auburn took a 7-0 lead on Marshall’s 45-yard rush, but Alabama answered by scoring the game’s next three touchdowns. McCarron threw a 7-yard touchdown pass to Jalston Fowler with 11:00 left to play in the second quarter to tie the game 7-7.

On the Tide’s next drive, McCarron threw a 20-yard touchdown pass to receiver Kevin Norwood to make the score 14-7 Alabama.

After holding Auburn to a three-and-out, Alabama put together a 5-play, 56 yard drive to take a 21-7 lead, capped by a 1-yard Yeldon touchdown run.

With Alabama holding all of the game’s momentum, the Tigers’ ensuing drive might have been the turning point of the contest. Auburn marched 81 yards on seven plays — all rushes — to bring the score to 21-14 at halftime. Tre Mason’s 1-yard rush capped the scoring drive. Mason finished the day with 164 yards rushing and Marshall added 99 on the ground.

Auburn got the ball first to begin the second half and the Tigers marched 69 yards in nine plays. Marshall’s 13-yard touchdown pass to C. J. Uzomah evened the game at 21-21 with 11:56 left in the third quarter.

There’s rarely a day in the state of Alabama where the Iron Bowl doesn’t come up in a conversation or... read more