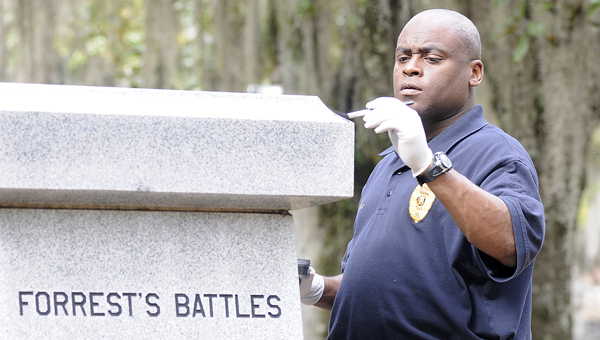 The spark: Selma Police Department’s Sgt. Tori Neely dusts for prints in March 2012 after the bronze bust of Nathan Bedford Forrest was stolen from the monument that is placed in Old Live Oak Cemetery. This theft is what led to monument sponsors to lead efforts to build a bigger monument, which drew protests and ultimately led to a lawsuit after the city of Selma shut down construction efforts. — File Photo

In a 5-3 vote, the Selma City Council voted to approve a settlement in a lawsuit over a monument to Confederate general and former Klu Klux Klan leader Nathan Bedford Forrest, effectively ending the suit.

The settlement terms include giving a deed to the one-acre tract of land containing the monument in Old Live Oak Cemetery to Chapter 53 of the United Daughters of Confederacy. Other terms include allowing KTK Mining to replace the bronze bust of Forrest, but not allowing the original plans to construct a taller structure; installing cameras and lighting for security; making the circle handicap accessible; placing a cannon on a pedestal previously intended to raise the monument’s height and paying a total of $100,000 to KTK Mining for a violation of the company’s due process rights.

The city’s liability insurance will pay $50,000 of the damages. The other $50,000 will be taken from a fund set up to receive a half-cent sales tax, passed earlier this year. The fund currently contains $74,686.

Before voting in favor of the settlement, council president Corey Bowie said it was time for the city to move forward and focus on more important issues plaguing Selma.

“We have to look at the bigger picture,” Bowie said. “We are going to have to embrace both the civil war and the civil rights movement as part of our city’s history. Once we can appreciate both ends then we can move past this.”

Randolph said he felt the city was giving up too much in the settlement.

With the settlement approved, city attorney Jimmy Nunn said the lawsuit is effectively over.

Had the settlement not been approved, Nunn said the city faced much larger consequences, including paying nearly $300,000 in attorney’s fees.

The lawsuit began when the city suspended KTK mining’s construction permit on Sept. 25, 2012 after questions were raised about who owned Confederate Circle.

In March 2012, the monument’s bronze bust was stolen, leading to the group Friends of Forrest developing plans for relocation. Protests began again around the monument months after construction began.