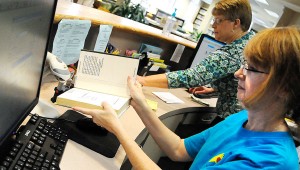 Ten years since it’s latest update, the circulation system at the Selma-Dallas County Public Library is finally set for a first class overhaul.

Becky Nichols, director of the library, said that while the old system has worked fine, the update was much needed for improvements in the years to come.

“That is pretty significant because of how rapidly computers change, and we’ve done a good job with what we have,” Nichols said. “The whole purpose of this is to position this library to serve the future library needs of this community, both digitally and in-house.”

The technological improvements will be paid for with money received in a $25,510 grant from the Alabama Public Library Service, and will cover several needed upgrades.

“The grant covers the new server, six new work stations, as well as a total upgrade and a data migration from the current server to the new one,” Nichols said.

She added that the new server would allow the library to keep better track of what matters their 26,000 patrons are most interested in.

“With this server we will be able to expand our patron database, as well as be able to look at it more carefully,” Nichols said. “The upgrade will allow us to more fully understand our patron’s needs.”

Nichols said the library currently circulates 70,000 items — including books, CD’s, DVD’s and e-books — and the new server would allow them to increase that number.

One area the library has seen increased activity is online through e-book downloads to users tablet computers.

“Our users are not necessarily the ones that will come into the library any more. We have had over 1,500 users in Selma and Dallas County access our e-books since we opened that in May,” Nichols said. “This is telling us that the e-books are more popular, so we have purchased with this is an e-book portal which will make the download of these works so much easier.”

Nichols said the new system would allow library users to manage their own library account over the internet.

The library will be closed on Wednesday, Dec. 11, in order for staff members to train on the new circulation system. Nichols said library users shouldn’t notice any major changes in their library experience after the system is launched.

Nichols said she is grateful for the grant money, and glad that the library will now have the latest technology to better serve the people of Selma and Dallas County.

“The role of a public library is to store and share public information, and that is all we are doing,” Nichols said. “Who knows what the future holds, but we are positioning ourselves for what’s next while provide the best and most efficient services we can.”

The system is expected to go live on Dec. 19.