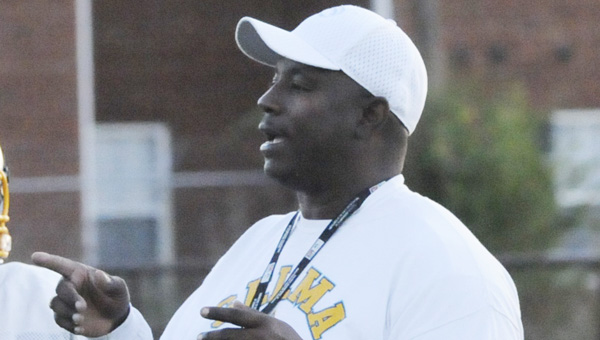 Selma head coach Leroy Miles talks to his offensive line during practice on Tuesday. The Saints will travel to Spanish Fort to take on the No. 1 team in Class 5A Friday night in a playoff game. The only playoff win in Selma High School’s history came in 1987. –Daniel Evans

Selma head coach Leroy Miles knows his team has a tough challenge ahead of them when they travel Friday night to take on No. 1 Spanish Fort, winner of two of the last three Class 5A state championships.

But, he also knows that his team comes in as a heavy underdog, with nothing to lose, and a few tricks up its sleeve.

“To get a chance to play the defending state champion from last year and they are undefeated, we have nothing to lose and everything to gain,” Miles said. “We are going to strap up, tighten it up and take our sledgehammer with us and swing.”

If the Saints’ proverbial sledgehammer takes a big enough swing and the Toros do fall victim to the upset, Miles said it would be the biggest win in Selma’s football history, considering the Saints only playoff win came in 1987.

He said he watched film all weekend on the Toros — who he admits are a really good football team. However, Miles said his team has already seen some of Class 5A’s top teams, considering No. 2 Jackson, No. 7 Saraland and playoff regular Demopolis all play in the Saints region, so this is just another challenge.

“Our kids are very excited about being in the playoffs and getting an opportunity to play the No. 1 team in the state,” Miles said. “It says where our program is at this point and we are up for the challenge. We are ready and excited about it.”

Friday’s trip will be around three hours for Selma, but Miles said his team should be used to it by now considering the road trips the Saints have faced.

“It is something we are conditioned to,” Miles said. “This is our fourth trip. We have been down there for Jackson, Saraland, Satsuma and this playoff game.”

So, how does Selma plan to test the state’s No. 1 team? Miles said his team has a few plays that they are yet to show on film this year.

“We are putting in some things in that we have been holding off all year, thinking that we can move the football on them,” Miles said.

Plus, after watching his team compete this week, he thinks the Saints are prepared for the defending state champions.

“I’ve been very impressed with how our kids came out to work Sunday at film session and practice yesterday was so exciting,” Miles said. “It was up-tempo and kids were moving around real fast. They are up for the challenge.”

One of the goals Selma had this season was to be one of the best teams in school history. A victory Friday night would match the Saints best win total in a season.

“This would be an opportunity for us, like we’ve told our kids all year, to make history and be one of the best teams in the history of this school,” Miles said.

Selma does not usually commit silly penalties, something Miles believes gives his team a better chance of winning Friday night, but turnovers might be the key to the game.

“I think the key to the game will be controlling the football and keeping their offense off the field and not giving up big plays,” Miles said.

Spanish Fort likes to run a spread offense where they spread defenses out, while Selma likes to punish teams with the running game.

The Toros are on a 19-game winning streak, having not lost since Oct. 5, 2012 in a 31-21 defeat to St. Paul’s. Spanish Fort has outscored its opponents 426 to 87 this season. The Toros have scored 40 or more points seven times this season, including four consecutive games.

Since 2000, Spanish Fort has not lost a game where it has scored 30 or more points, going 45-0. In the same time span, the Toros are 66-7 when scoring 20 or more points, which speaks to their defensive consistency.

Meanwhile, Selma is no slouch on offense either. The Saints have scored over 30 points six times this season, including their last three games.

Bulldogs rally from 24 down to shock Milligan

Selma University’s Jabrea Stiggers dribbles the ball in a game Tuesday against Milligan College. The Bulldogs rallied from a 24-point... read more