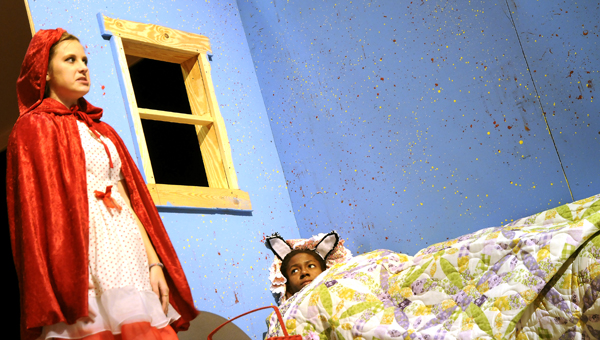 Little Red Riding Hood, left, played by Abreanna Kuhn, and the Big Bad Wolf, played by Karissa Smiley, act out a scene on Tuesday at Wallace Community College’s Goodwin Theater. In the scene Smiley is pretending to be Kuhn’s grandmother.

You’ve only heard one side of the tale of Little Red Riding Hood. Dallas County High School’s Drama Club is preparing to tell you the other side of the story.

At the school’s fall children’s play, students will tell the well-known side of the story before telling of a bratty Red Riding Hood with an attitude. The twist in plot comes when the big bad wolf has a chance to tell its side of the story.

Dallas County teacher Don Speed said the play has been fun to put together. Speed said acting is a great outlet for shy students to be more vocal.

“Every year you really see one or two kids come out of their shell,” he said. “It also teaches teamwork.”

The drama club will put on a total of five shows — four for local elementary school students and one public performance at 7 p.m Thursday at the Wallace Community College-Selma’s Goodwin Theater.

The public showing won’t cost any money. Instead, the drama club is asking for all attendees to bring canned goods. The canned goods will later be donated to the Selma Food Bank.

A packed house at the public showing could put the show at more than 1,200 total attendees.

And, children may not be the only ones chuckling at the play.

“I always try to throw in something for the adults,” Speed said.

Speed, who has an undergraduate and graduate degree in fine arts, isn’t the only one who enjoys acting at Dallas County.

“I really enjoy being on stage and entertaining,” Land said. “It really takes your mind off of things.”

Basketball fans called on to vote

Beginning at 9 a.m. Wednesday, area high school basketball fans will have a hand in who will appear on this... read more