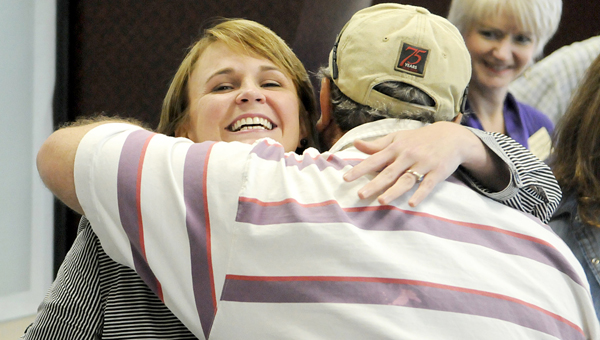 Wednesday was an average workday at the Dallas County Family Resource Center, until the Selma-Dallas County Chamber of Commerce walked in.

But Justice’s friendly attitude and work ethic aren’t the only things that set her apart. She is legally blind and resource center executive director Donna Long said Justice is also a volunteer, meaning she isn’t paid for her work.

“She has been volunteering since we opened in July 2012,” Long said. “She isn’t paid, but acts like a full-time staff member. She is so consistent and diligent; we couldn’t do it without her.”

Long added that Justice’s consistent work is a testament to her ability to overcome her disability.

Justice’s name was submitted for the Rising Star award a short time ago, but she didn’t know it was a special day until chamber of commerce executive director Sheryl Smedley began reading the award submission.

Long said she kept the award a secret to make the day even more special.

Shortly after 11 a.m., Justice was called to the front desk.

“Justice can you come up here,” Long said.

As soon as Smedley announced that Justice had won the award, a smile broke out on her face.

But another surprise was in store as Justice came from behind the front desk to receive the award. Several members of her family were standing in the lobby to witness the award presentation.

“I’m just so overwhelmed,” Justice said. “I didn’t expect any of these things. I just try to do my best everyday. A lot of individuals are going through difficult times when they come in here and I just try to be friendly to them.”

Concordia College Alabama has launched a $20 million campaign in an effort to enrich their programs, enhance their students’ experience,... read more