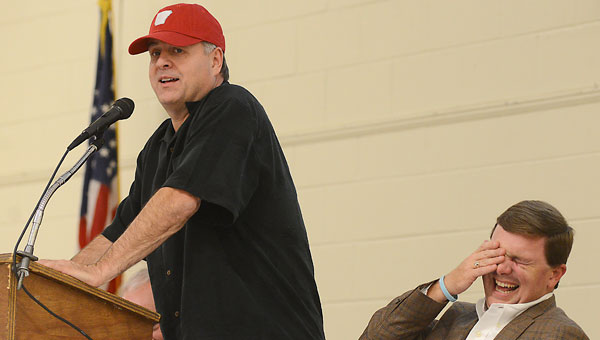 The voices of college football coaches and radio personalities radiated through the walls of the Carl C. Morgan Convention Center Monday, entertaining members of the Selma Quarterback Club and their dates on ladies night.

The voices were all coming from one man, guest speaker Scott Moore.

“I would sit at home with a recorder and I would impersonate all of the radio guys and I would listen to the coaches do their shows,” Moore said.

Now, Moore hosts a show called ITalkSEC on radio stations all around the country. When he impersonates coaches on his show, he says he does so very carefully.

“You don’t want to say anything that is going to embarrass the coach because when people turn the radio on and hear the interview they think it’s the coach,” Moore said.

He said he thinks Bowden is his best impersonation, although people in Alabama love to hear Saban and Spurrier as well. During Monday’s meeting, he was asked to do an impersonation he doesn’t do very often, Paul “Bear” Bryant.

“I don’t usually do Bryant because your voice has to be really perfect to do it,” Moore said, but his impersonation of Bryant was met with applauds in a room full of people that know Alabama football very well.

This was Moore’s third time to speak at the Selma Quarterback Club.

“People have tough days and it is a privilege to be able to come and make people laugh. I really take that seriously and I really enjoy the opportunity to do that. It’s a honor for people to want to come hear you talk,” Moore said.

Selma doubles up on tax service

The Alabama Department of Revenue will take over Selma’s tax collection services Nov. 1, but the city hasn’t quite given... read more