Southside falters in second half against Excel, falls 33-16 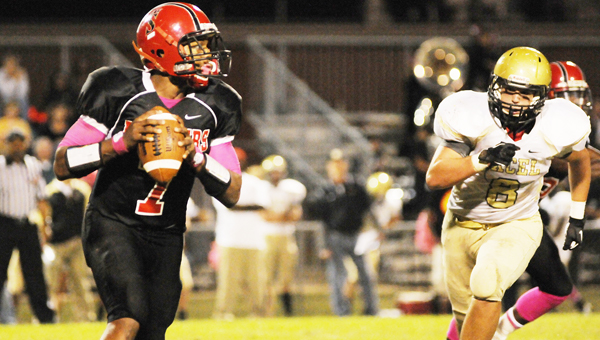 Southside quarterback Khamari Gibbs looks for open receivers in the first half of Friday’s game against Excel at Southside High School. Excel won the game 33-16, pulling away in the second half. –Josh Bergeron

For a few minutes in the third quarter, it seemed like Southside might pull off a homecoming victory over Excel, but three second-half interceptions were too much for coach Daniel Flowers’ team to overcome. The Southside Panthers lost 33-16 to drop to 2-6 overall and 1-5 in Class 3A, Region 1.

Flowers said his team ran the ball well, but failed to execute on important passing plays.

“It just has to be better coaching on our end,” he said. “We have young guys all over the field, but as they get more experience they will play better. Our problem was that we were one-dimensional; we can’t win if we just run the ball well.”

The Excel Panthers got on the board first with a 6-yard touchdown run from Dekota Welker after stringing together several short-yard runs.

The Southside Panthers scored on the ensuing drive when receiver Derick Daniels hauled in a 36-yard pass in the corner of the endzone. Southside made the two-point conversion to make the score 8-7.

Excel defender Joseph Mitchell came up with an interception with 7:49 remaining in the second quarter. Excel turned the interception into a score on an 8-yard run from Welker, his second of the game. Excel failed to make the two-point conversion. Excel scored again shortly after on a 1-yard pass to Garrett Casey.

Southside seemed to have some second-half momentum after quarterback Khamari Gibbs ran over a defender and into the endzone for a 6-yard touchdown to make the score 19-16 Excel.

But turnovers and miscues quickly began to take their toll.

Excel made quick work of a punt that barely sailed 20 yards, scoring on a 40-yard pass from quarterback James Hudson to Casey with 3:54 left in the third quarter. Less than a minute later, Excel defender Axelrod Avalos picked off another Southside pass. Immediately after, Welker recorded his third score of the game on a 25-yard pass to make the score 33-16.

Next week Southside will travel to Daphne to take on Bayside Academy.