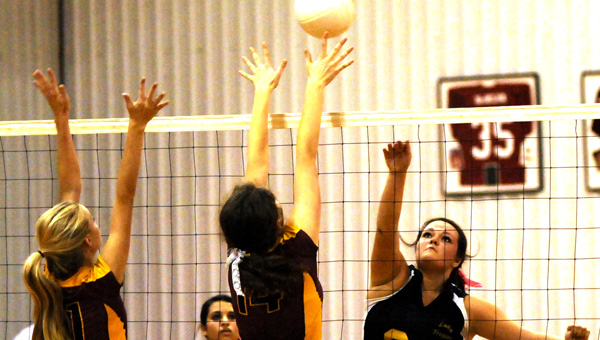 In the end, Meadowview held on, surviving a fantastic comeback effort from Morgan that saw the Senators tie the match at 2-2 and send it to a deciding fifth game.

Momentum swung back and forth all night, but it sided with Meadowview in the final set, which ended up being the difference.

“Every time something went one way or another the other team had momentum for four or five points,” Meadowview head coach Tim Burton said. “You get a swing and we’d get four or five. It was a tight match.”

Momentum was clearly on Meadowview’s side early. The Trojans won a hard fought first set and then took the second set, before watching Morgan fight back to win the third and fourth sets and force a tiebreaking game.

Although the comeback seemed like it could overwhelm the Trojans, it clearly didn’t. Meadowview won the fifth set 15-6, after building a 12-2 lead.

“The fifth set we got our momentum going and they didn’t have time to turn it around I guess,” Burton said. “There weren’t but a couple of changes in that one.”

Burton said his team started playing well after faltering a bit in the second and third sets.

On the other side, Morgan Academy head coach Jennifer Moore said even in the loss, the Senators comeback attempt said a lot about her team.

“I think it says a lot about the team that it was down two games and came back to win two games to force it into the fifth game of the match,” Moore said. “They are definitely getting better. You can see improvements, even since the last Meadowview game. It is a completely different team.”

The last Morgan vs. Meadowview game Moore referenced was a 3-0 Trojans win weeks ago. On Tuesday night, it looked for a while like the Trojans might repeat that performance, but the Senators made sure that never materialized.

The first set went to a tiebreak, where both teams had numerous chances to close it out. In the end, three straight points by the Trojans ended up being enough for a 30-28 win.

Meadowview rode the momentum from the first set to a 25-21 win in the second set to take a commanding 2-0 lead.

Midway through the third game, it looked like it might be a short night for both teams. Meadowview led 19-14 and was on the verge of sweeping their rivals for the second time this season, but Morgan had other ideas.

The fourth game was back and forth, resulting in the teams being locked in a 17-17 stalemate. Playing with a renewed energy from their previous set win, the Senators won the next eight points to pull away with a 25-17 victory.

Although momentum was completely on Morgan’s side, Meadowview swung it back in its favor in the final set. The Trojans jumped out to a big lead in the final game and never looked back.

Moore said her team showed a bit of nerves in the final set, which may have been the difference.

“I think they were just so nervous, actually pulling out that win,” Moore said. “Nerves got to them and they couldn’t handle the serve receive.”