Mitchell talks about time with Auburn 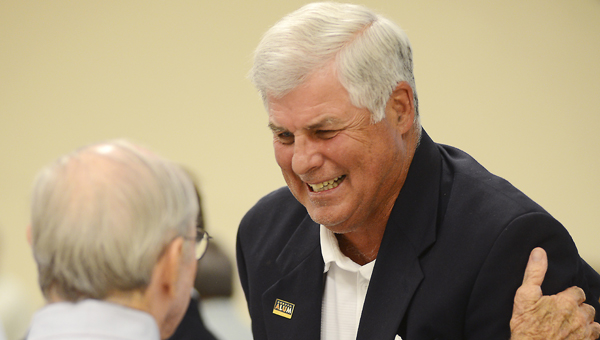 Instead of focusing his talking points around football, he started out by talking about how much he loves Selma.

Mitchell’s ties with the city really started when he met his wife Anne Cammack, who was from Selma.

“Selma is a place that I love,” Mitchell said to begin his speech. “[There are] great people [in Selma], people of substance. Solid citizens.”

When the speech turned to the gridiron, Mitchell talked about his playing career at Auburn. He said he was “full of himself” when he walked on at Auburn to play football, but that quickly changed after his first practice. The pads and cleats he was assigned were too big, so he had to go ask his high school coach for high school equipment that would fit him.

“Walking at Auburn in the SEC is about as humbling a situation as you could ever have,” Mitchell said. “I was full of myself when I got there. I’d been the best ball player on the field in high school in most of the football games.”

As soon as Mitchell got to Auburn for practices, his mindset changed quickly. He was given equipment that he couldn’t wear because it was too big for him, so he ended up wearing high school equipment.

“After practice I called my old high school coach and I drove down to Eufaula. He met me in the gym and gave me some high school stuff that fit and I came back to Auburn for the afternoon practice,” Mitchell said. “That’s what I practiced in. It’s humbling. You realize you aren’t the top dog.”

Eventually he earned a scholarship in his sophomore season for a hit on the Tigers Terry Beasley at practice, who Mitchell described as the “world’s fastest man at the time.”

Mitchell is most known for his performance in the 1972 Iron Bowl, which has become known as one of the greatest games in the series history.

With No. 2 Alabama leading 16-0, Auburn turned to special teams for an incredible comeback.

Bill Newton blocked two punts and David Langner returned both for touchdowns to allow the Tigers to steal the game 17-16.

“That was really no accident,” Mitchell said referring to the four blocked kicks the Tigers had in the game. “We knew we could block some kicks. Matter of fact about the sixth or seventh game that season we stopped blocking kicks, thinking we might need it against them.”

Mitchell said David Langner, who was scheduled to speak, is fighting stage four leukemia and that is why he could not attend.