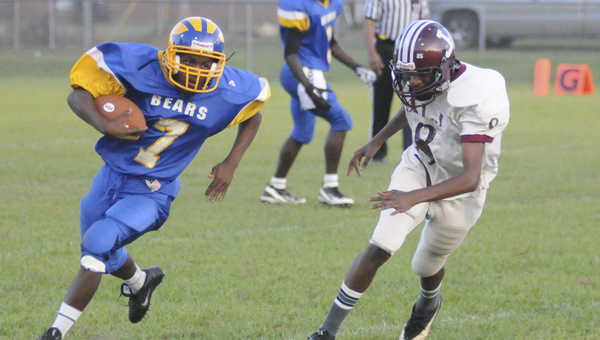 Keith running back Marquez Hatcher runs around right end for a long gain on Tuesday night in the Bears victory over A. L. Johnson. Hatcher also intercepted a pass in the endzone in the closing seconds, preserving Keith’s 8-6 victory. The win was Keith’s first win of the season. –Daniel Evans

With A. L. Johnson at the 5-yard line in the closing minutes, it looked like Keith’s junior varsity team was about to lose another close game.

But, the Bears defense came up big, with Marquez Hatcher intercepting a pass in the endzone to preserve Keith’s 8-6 lead and give the junior varsity team its first victory of the season.

“This is our first win in two years,” said Keith head coach Cecil Williams. “We didn’t win a game last year. We are a young group and coming back this year we got a chance to play hard and win. It should be a builder from this year onto the next.”

Hatcher gave the Bears the lead on the third play of the game, but A. L. Johnson shut the Bears down from there. Later in the first quarter, A. L. Johnson’s Dyshaun Thrash ran a Keith fumble back for a touchdown.

The two-point conversion failed, leaving the score at 8-6, with several minutes left to play in the first quarter.

The scoring would end there, although both teams had several chances from there.

Keith fumbled three times in the second half; something Williams said his team is going to have to work on before their season finale against Prattville Academy.

The final fumble came with 4:43 left in the fourth quarter, setting A. L. Johnson up with a chance to steal the game from the Bears. Thrash moved the Eagles into the redzone and threw two passes to put A. L. Johnson at the Keith 5-yard line with under a minute to play.

But, the Keith defense stood tall.

“The goal line and the defensive stand was the best part of the game,” Williams said. “Defense showed itself tonight.”

Selma’s only competitive gymnastics team, the Dixie Flips, traveled to Montgomery on Sept. 21 and 22 to compete at United... read more