Selma to be the center of Pro Bono Week 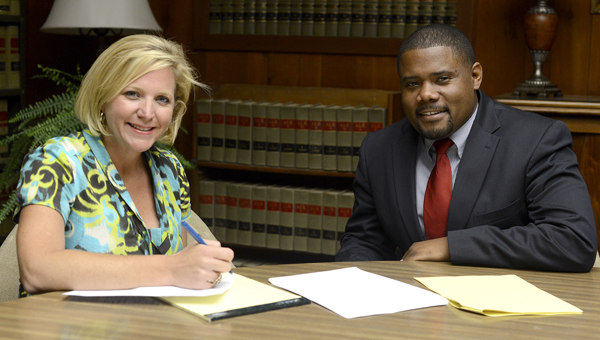 Jana Russell Garner, an attorney with Reeves & Stewart, P.C., and state Rep. Darrio Melton, are among the organizers of the 2013 Alabama Pro Bono Week, which will be centered in Selma. — Jay Sowers

In conjunction with the national observance of Pro Bono Week, Gov. Robert Bentley has proclaimed the week of Oct. 20 to highlight pro bono services rendered throughout Alabama.

State Rep. Darrio Melton said this year’s Pro Bono Week — which will be centered in Selma — is an opportunity for officials to recognize the importance of the free services provided by every branch of government to those who could not normally afford them.

“It is fitting that here in historic Selma we are highlighting the relationship of the three branches of government during Pro Bono Week,” Melton said. “The coalition between the executive, legislative and judicial branches is crucial when it comes to providing access to indigent persons. As we move towards Pro Bono Week it is even more vital that all three branches are seamlessly working together to provide justice for all Alabama.”

Anthony A. Joseph, a lawyer with Birmingham based firm Maynard, Cooper & Gale, P.C. and is Alabama State Bar President, said that while the pro bono services offered today don’t meet the needs of everyone across the state, they do wonders for those who have been helped.

“We recognize that pro bono alone cannot adequately solve the growing, unmet need for access to justice, but for someone who can benefit from pro bono services, one attorney’s contribution of time and talent can make a world of difference,” Joseph said.

Any person residing in Bibb, Dallas, Greene, Hale, Lowndes, Marengo, Montgomery, Perry, Sumter or Wilcox counties, who are in need of legal services they cannot afford are encouraged to attend the clinic.

Students from the Jones School of Law will arrive before the start of the clinic aboard the Justice Bus.

Following the clinic, an invitation-only reception honoring Joseph will be held at the St. James Hotel.

The purpose of the reception is to give legislative and judiciary members time to discuss how access to legal representation can be improved in the future.

The East Selma Fish Pond will open for the first time Tuesday, giving everyone in Selma a relaxing place to... read more