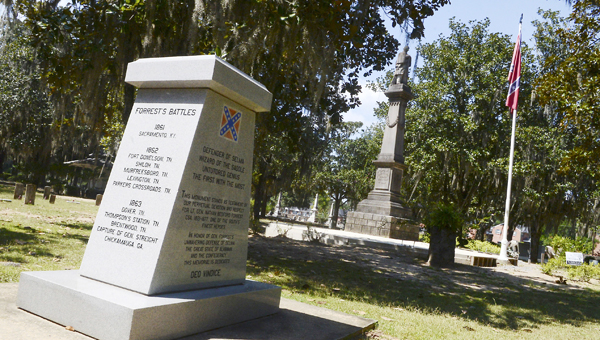 The Selma City Council took a step toward solving a 136-year-old question of ownership Tuesday evening.

The council voted 4-1 to begin the process of selling an acre of land in Old Live Oak Cemetery to the United Daughters of the Confederacy for $60,000.

Four of the nine council members were not present at the meeting, including Council President Corey Bowie.

Ward 1 Councilmember Cecil Williamson, who led the meeting as council president pro tem, said the sale would not be official until the council drafts an ordinance, which would take a minimum of one month. Once drafted, the council would read the ordinance twice and make a final vote during the second reading.

The land includes a monument dedicated to Confederate Lt. Gen. Nathan Bedford Forest, unveiled in 2000 at the city-owned Vaughan-Smitherman Building. It was moved to Old Live Oak Cemetery after the momument was defaced with trash. Selma residents continued to protest the monument until March 2012, when the monument’s bust vanished.

After the March 2012 theft, construction immediately began on upgrades to the Forrest and Confederate monuments, but in August 2012, the council voted to halt construction work after questions were raised about who owned the property. The work stoppage resulted in a $375,000 lawsuit by construction company KTK Mining.

Tuesday’s vote includes a stipulation that KTK Mining drops its $375,000 lawsuit against the city of Selma.

Ward 6 councilmen B.L. Tucker said he made the motion to begin the sale process after a recent cemetery visit.

“We have been dragging this whole process on for so long and I think it is time to put it to rest,” Tucker said. “I visited the cemetery recently and found that the UDC is keeping it clean and the cemetery workers don’t even have to do any work on it. I came up with the $60,000 price because I thought it was fair.”

“I see no reason why the UDC should purchase the property when we already own it,” Godwin said.

Godwin contends the United Daughters of the Confederacy obtained the land in 1877 when the city of Selma ceded the rights to the land to a predecessor organization — the Ladies Memorial Association.

Neither the city, nor the UDC can find where a deed was created and transferred to make the donation of the property legal.

Though Godwin and the UDC object to the sale, Williamson said the monument is benign and the city should solve the situation before trial proceedings begin.

“I’m more concerned with the city losing money than any thing else,” Williamson said. “A lawsuit like that could really put the city in a bind. The monument is a military monument and nothing else. Nathan Bedford Forrest defended the city of Selma.”

Ward 4 councilwoman Angela Benjamin laughed as she made the lone vote against beginning the sale of the land. Benjamin said she preferred to leave all decisions about the monument and surrounding land to the U.S. District Court.

“I just want to totally stay out of this,” Benjamin said. “Of course, I am concerned about the city losing money, but I think it would just be better to leave it to the court.”

KTK Mining and the city of Selma have filed for summary judgments. U.S. Judge Kristi DuBose is presiding over the case and could make a ruling at any time. If DuBose denies both summary judgments, the case would continue to trail.

Williamson said Jan. 2, 2014 has already been chosen as the jury selection date.

The city council’s next meeting is its work session at 6 p.m. on Sept. 19. Its next regular meeting is Set. 24.