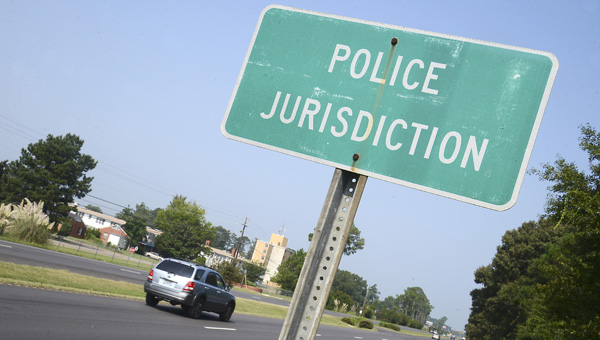 Authorities are considering eliminating the police jurisdiction coverage are, which stipulates that the Selma Police Department responds to calls in the area which surrounds the city limits.–Jay Sowers

By Jay Sowers
The Selma Times-Journal

The topic arose to the forefront of the conversation for only a few moments of Tuesday’s Selma City, but talk of eliminating the police jurisdiction that surrounds Selma looks to dominate many conversations over the coming days and weeks.

If the jurisdiction ring, which is three miles in every direction but north around the city, is eliminated, coverage of that area would then become the responsibility of the Dallas County Sheriff’s Office.

Selma Chief of Police William Riley said that while the idea of eliminating the police jurisdiction has been floated before, its mention in Tuesday’s council meeting means it’s time for the issue to be addressed.

“We want to sit down and discuss this now that it came up in city council,” Riley said. “It has come up in the past, but always kind of died down. Right now we are just going to look it over and review the idea.”

Bowie said the Selma City Council Administrative Committee – which consists of himself, as chair, as well as Ward 3 councilmen Greg Bjelke and Ward 6 councilman B.L. Tucker will meet in the coming weeks to further discuss the idea.

Bowie was quick to point out that any decisions made cannot only have current financial struggles in mind.

“My vote will be for what is advantageous for everyone in the long haul,” Bowie said.

Shannon Ethridge, a manager at the Selma Curb Market, which is just across the Edmund Pettus Bridge and in the police jurisdiction, said if the changes occurred, he thinks the store’s sales tax should go to the county instead of the city, as it currently does.

“Our city sales tax in the police jurisdiction is like half of what it is in the city, and if we’re not getting anything out of that, they need to convert that to a county tax and give it to the county,” Ethridge said.

Ethridge, who has worked at Curb Market for 20 years, said the idea of change isn’t something he’s dreading.

If Selma Police Department patrols are pulled back just to the city limits, the most populated area affected would be Selmont. Dallas County Commissioner Connell Towns, who represents the Selmont area on the commission, declined to comment at this time.

Saints race out to quick lead, hold off Panthers

Southside running back Derick Daniels looks for a hole against Selma in Friday’s game at Memorial Stadium.–Tim Reeves If you... read more