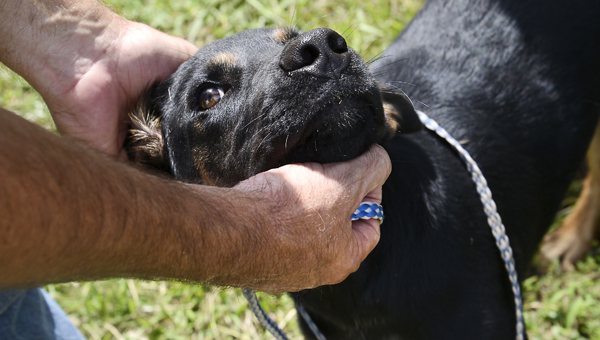 PAWS for Hope and Faith founder Shane Smith, left, rubs the chin of Paco, a shepard mix, while playing with him outside Friday afternoon at the Selma Animal Shelter. Paco is one of the animals up for adoption at the shelter. — Jay Sowers

After working to have animals currently housed at the Central Alabama Animal Shelter “pardoned” until Aug. 27, Shane Smith’s next goal is to empty the shelter of all animals, either having them adopted locally or transferred to other shelters outside the state where they can be adopted.

To further that cause, the CAAS will host an animal adoption event Saturday at their facility at 206 Medical Center Pkwy. from 9 a.m. to 2 p.m. People who want to adopt a dog or cat can do so at the reduced rate of $60 for a dog and $50 for a cat, which includes a health check by a veterinarian and spaying or neutering.

Smith, from Macon, Ga., who founded “Shane’s War” to honor the memory of Hope, a rescue dog he and his wife Janet adopted, said his goal is to not only empty the shelter, but to bring awareness to the plight of unwanted or neglected dogs and cats that find their way to the shelter.

“My personal goal is to always get them all out,” Smith said. “But our main objective is to raise awareness for the community and get the dogs and cats in a better situation than they are now.”

And apparently it’s working. Smith said when he arrived in Selma there were 124 dogs and cats in the shelter, and that number is now down to around 90, with many Selma shelter animals headed for shelters where the adoption need exceeds availability.

“The whole pardon event is to build a network out of state so the pardon is just the beginning,” Smith said. “With (CAAS’) out of state network it gives these animals some exposure to these networks.”

Although local adoptions tend to be low, CAAS’ board chairperson Sarah Youngblood said events such as Saturday’s brings awareness to the local adoption need and also creates opportunities for animals to be fostered as they wait for transfer to another shelter.

“We’re not just for animal control, we’re all about saving the animals,” Youngblood said. “That’s why we wanted to bring Shane in so we could get the word out to others outside Selma about the need here. He’s working on trying to save every animal in the shelter. We’re hoping there will be some members of the community who will step up and help us get some dogs and cats adopted.”

Youngblood, who got involved in CAAS after fostering pets herself, said any type of help the public can provide will go a long way.

“People who already have pets can sponsor the rescue fees,” she said. “It helps the pet get adopted if it’s known the fees are greatly reduced or paid in full. Even if it’s $5 or $10, it all adds up and makes a big difference.”

Youngblood and Smith encourage anyone who wants to help to stop by the shelter Saturday to learn how adoption or fostering works.

“We just want the public to come out and show support,” Smith said. “If you can’t adopt an animal, bring pet food, toys, towels, blankets or anything an animal needs.”

Contact the Selma Animal Shelter at 877-2204 for more information on the adoption event.