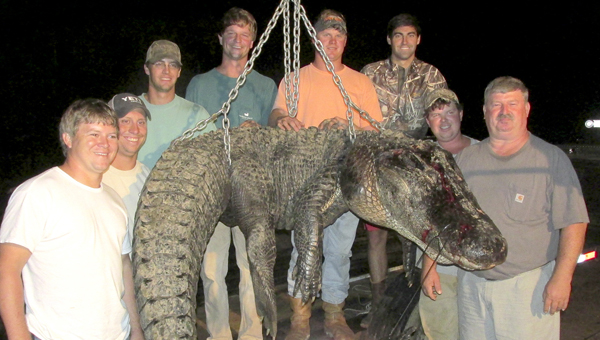 The 2013 alligator hunting season got off to a fast start over the weekend, with a number of large alligators being captured. One of the large ones caught included a 14-foot, 725.5 pound monster landed by a Selma team led by Josh McAteer. The team captured the alligator in Cook’s Creek. The team included, from left, Calin Cole, Blake Smith, Ware Cox, Zach Hughey, McAteer, John Cox, Jim Kilpatrick and Sammy McAteer. (Photo courtesy of Gettin’ Outdoors Radio Show)

Alligator hunters often sit for hours, looking out on the river with spotlights, hoping to spot a large alligator making himself visible before the wee hours of the morning.

For Selma’s Josh McAteer, who was awarded his first alligator tag this year, the wait was very short Saturday night.

McAteer and his crew of Calin Cole, Blake Smith, Ware Cox, Zach Hughey, John Cox, Jim Kilpatrick and Sammy McAteer, killed an alligator they had been tracking since spring.

The alligator, a massive 14-foot, 725.5 pound reptile, took about an hour to kill, after breaking six lines. After not seeing the alligator since spring — despite hours of searching for him on the river in time spent scouting for alligator season — McAteer spotted him almost instantly Saturday night, just minutes into the night’s hunt.

“We saw it a long time ago, probably back in May and April,” McAteer said. “We never did see it again, until the day we shot it. We tried to go out scouting for it but never did see it.”

Last year, McAteer was on a crew that killed a 12-foot alligator, but it took around four hours to hook and kill the animal. This year the hunt was made easier since Cox, one of McAteer’s best friends, also received a tag. Since both hunters had tags, two boats full of hunters were used to hook the alligator, despite his best efforts to escape.

Having two boats allowed the hunters some flexibility as to what they could do when chasing the alligator.

“We had one boat we could haul the gator on and another boat where we could get up in there and try to get him,” Cox said. “We took the smaller boat and went up in [Cook’s Creek] and found him. He broke several hooks. It was a fight.”

Once the alligator was captured and in the boat, McAteer said he felt relieved.

“It is kind of a relief, because you have been up for so many nights. Especially when you know he is there and you never can see him,” McAteer said. “When I finally saw the head on him when he came up I knew that was the gator I was looking for.”

Alligator season continues this weekend and since Cox still has a tag, McAteer is going to help his friend try to capture an even larger gator this upcoming weekend.