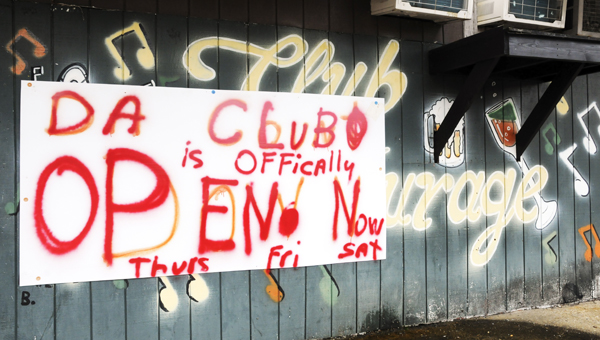 Club Entourage boasts three bars and a dance floor along with several pool tables. After losing their business license due to a deadly shooting, owner Clyde Richardson said large crowds swarmed the club Thursday night as it opened its doors for the first time in a year. –Sarah Cook

“When we opened the doors last night, it was like the Walmart of night clubs,” Richardson said. “When these doors open, the people flock to this club.”

The club’s business license was revoked in June of 2012 after a shootout occurred outside the club’s doors — leaving one dead and four injured. After being escorted out of the club for violent behavior, two males returned to the club at about 1 a.m., kicked in the door and began firing several shots.

Before the two shooters could make their way further into the club, where hundreds of patrons were gathered, security personnel fired back.

In response to this incident, Richardson said he plans to implement heightened security.

“We’re working in conjunction with the city of Selma right now to have police officers patrol the area around the club at night,” Richardson said, noting that he can’t control the violent behavior that goes on outside Club Entourage’s walls. “Once you step out this building, you’re not in Club Entourage anymore — you’re on city property, and I don’t have any responsibility of what goes on.”

Rodney Reece, license inspector for the city of Selma, said Richardson didn’t have to appear before the Selma City Council to renew his business license because he still had an Alabama Beverage Control license from the state.

The club, which appears small on the outside, houses two bars on the first level and one bar on the second. A typical night at Club Entourage is like “one big, massive party,” Richardson said.

“They party up in here — this is a big massive party throughout the whole club,” Richardson said, noting that the crowd who frequents the club is young. “If somebody wants to come here and talk out of the side of their mouth and be real proper, this is the wrong place. This is a place to come and have a good time and let your hair down.”

“My goal is to make sure history doesn’t repeat itself,” he said. “I want this club to stay open for good.”

While Brown Chapel AME Church is historically noted and a place of interest, the new minister, the Rev. Leodis Strong,... read more