Boy works to save Selma Jewish temple, connect to ancestors 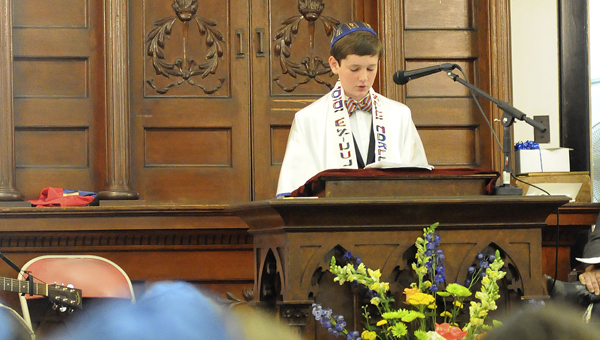 Elijah Schulman traveled to Selma with his family from Maryland for his Bar Mitzvah. He is only the fourth young person to have a Bar Mitzvah in the Selma temple in the last 40 years. He not only had his service in Selma, a place his ancestors settled, but raised $6,500 for restorations at Temple Mishkan Israel. — Ashley Johnson

Elijah Schulman, 13, of Bethesda, Md., said it is no coincidence he turned 13 at a time when Selma’s dwindling Jewish population, has humbly prayed for the continuance of their legacy and a means to restore their temple, Temple Mishkan Israel.

He not only had his Bar Mitzvah service at Temple Mishkan, but decided to focus his Mitzvah project — a service project done by a young person before their Bar Mitzvah — around raising funds for its restoration.

Schulman made the decision last year to have his Bar Mitzvah here in Selma, a place his family had only traveled to on a  few occasions because his great great-grandparents dwelled in Selma and Orrville in the early 1800s and were members of the Jewish community.

“The congregation that we belong to in D.C. doesn’t have a building,” Schulman said. “So what people usually do for Bar and Bat Mitzvahs is they rent one of the other temples that is in our area.”

But his mother had a better suggestion — to go to Selma where his ancestors settled ,coming from Europe in the 1800s, and have the service somewhere the family was connected to. His great-grandmother Marie Erdreich lived in Orrville, while his great-grandfather lived for a time in Decatur.

“We were looking into having it here and found out it wasn’t in such great shape, so that’s kind of where idea came to raise money to fix it up,” he said.

As of Friday, Schulman said he had collected close to $6,500 for the temple of his $10,000 goal. He did this through a website telling the story of Selma’s fading Jewish community, the story of the temple and mentions of his ties to the community.

Member of the Selma Jewish community, Ronnie Leet, said he was impressed with Schulman from the moment he met him, and his project has really touched he and the eight other members  at Temple Mishkan that, presently, only gather for special holiday services several times each year.

“This has touched all of us, simply because we are down to nine people, and this is what we have talked about for quite a while here — our legacy,” Leet said. “And that’s part of our effort to restore our temple — to keep the Jewish legacy from just disappearing in Selma. This young man is really tying in all of the things we have been talking about over the last couple of years. He is coming back to his roots and that’s what we are trying to preserve.”

Leet was also touched to see nearly 70 out-of-town visitors come to Selma for the service Saturday, giving more exposure about the temple facility and the expensive restoration needed — a restoration is projected to cost $4 to $5 million.

When asked if his Bar Mitzvah project was all part of God’s greater plan, Schulman said with conviction, “definitely.”

“It feels like right now is when the temple really needed this the most,” Schulman said of his Bar Mitzvah and fundraising project. “And it just happens to be right when I’m turning 13 …  so it kind of feels like it could be a coincidence — but I don’t think so.”

The Bar Mitzvah, which took place Friday and Saturday, also included several events at the Harmony Club on Water Avenue, which was once a Jewish social club. Schulman believes his great-grandparents spent time there.