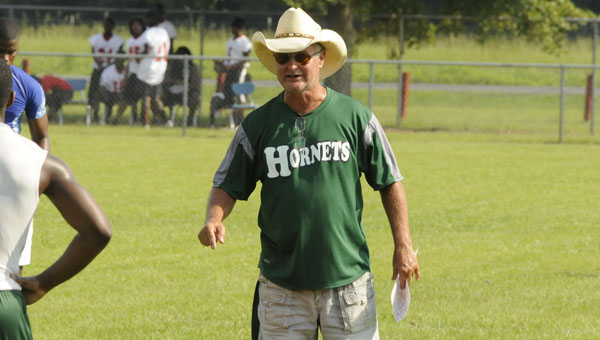 Dallas County head coach Barry Colburn instructs his defense before a play during a 7-on-7 at Southside High School Monday afternoon. -Daniel Evans

Although there were 7-on-7 contests, lineman were also at the camp and had an opportunity to get some on-field experience as well.

Dallas County, Maplesville, and Shelby County were the three schools that participated in the camp.

“[Tuesday] was a great day for Hornet football,” Dallas County head coach Barry Colburn said. “We carried a lot of kids, over 40 kids, and we ended up lining up at least three different offenses, two different defenses, played over 40 something guys, and got to play against [great schools], who I felt we matched up extremely well with.”

The camp was set up to where coaches assisted players, regardless of whether the player was from their school or not.

For instance, the lineman from the three schools all participated in drills together.

“They went through lineman drills and their coaches coached our kids,” Colburn said. “We coached their kids.”

Colburn said due to the camp’s format that allowed teams to bring lineman and allowed for a lot of coaching time, his team got to work on areas it had not been able to this offseason.

“Because of the format, we got to work a little bit on our running game,” Colburn said. “It’s a new offense, new defense, so any time you get a chance to line it up against somebody else and go through the motions and see what’s working and what’s not working, what kids are doing what we ask them to do and which ones are not, [it’s good].”

Dallas County, like most schools, has used mainly man-to-man coverage in their 7-on-7 games this offseason, so Colburn looked at Tuesday as a chance to put in some of the team’s other defensive formations.

“The big reason for going over there was for us to work our zone coverages that we hadn’t used all summer, but that we will have to use in our defensive scheme in the fall,” Colburn said. “It’s hard to judge because they completed a lot of passes, but so did we because they were working on their zone coverage.”

However, Colburn was impressed with how his team played in the Hornets’ zone looks.

“We ran four different cover schemes, just to see what our kids know and don’t know,” Colburn said. “It is a lot easier to throw against a zone in 7-on-7 than it is to throw against that man-to-man stuff. I think we did really well.”

Although the teams could not wear pads or make contact during the camp, Colburn said his team progressed a lot through all of the different drills.

“After every play we took a break and you had a coaching period where you could make adjustments,” Colburn said. “[Tuesday] wasn’t so much about 7-on-7 or 11-on-11 as it was about teaching all morning and then being able to adjust and do a little coaching on the fly. That’s what we were trying to do.”

With the countdown at just a little more than three weeks before the Hornets’ jamboree Aug. 23 against Montevallo — coached by former University of Alabama quarterback Andrew Zow — Colburn feels his team is coming along at the right pace.

“We’ve been dabbling along. Our kids are familiar with our terminology and that is the key to it. Once you learn the terminology all you have to do is apply it and you are okay. It’s not like brain surgery,” Colburn said of his offense. “I think we will be alright. It’s not like we have to have our entire offensive scheme in for the first game against Montevallo.”

“What we will do is put in enough offense, and take a look at what we do against them and tweak one way or the other.”

Starting pitcher Jake Peavy, who lives in Dallas County, was traded from the Chicago White Sox to the Boston Red... read more