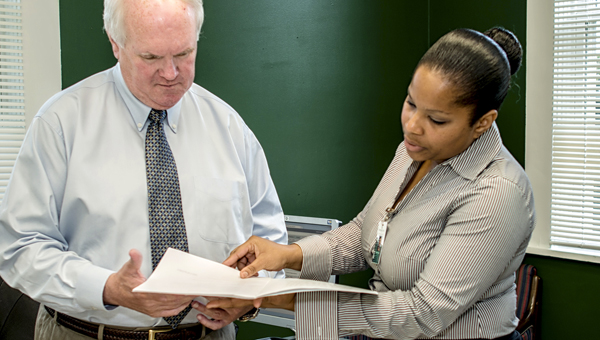 When she first arrived in Selma during her sophomore year of high school, she had no intention of staying and creating a life for herself in town. Desiree Taylor came to Selma High School unsure of the new place she found her family in and unsure of how Selma would play a role in her life’s journey.

Today Taylor, the director for communications and public relations at Concordia College Alabama, says she now knows God’s reason for bringing her to Selma and asking her to stay — to be a shining light in the darkness for others.

“When I left Selma for college, I wanted this place to be a part of my past,” Taylor said. “But what I realized was that in life, it’s about more than just fame, popularity and making money. It’s about reaching back to that person and lifting them up.”

She said she came to this realization when she returned to Selma after graduating from Auburn University-Montgomery and started working at The Selma Times-Journal. She observed how many young people in Selma, like herself, were not necessarily struggling financially, but were looking to find their place in the world and to find their self-worth.

“And I find that here at Concordia too,” she said. “Someone just needs to give these students a chance and they can really make an impact.”

Taylor related to these students and said she too struggled with trying to prove herself in Selma, but realized she had talents and skills to bring to the table and was being used by God for a reason, she said.

“There are so many of these young people that don’t really know themselves and feel like they have to prove themselves, much like myself,” Taylor said. “But I want to be the voice for those my age and let them know that you are somebody, and you have something to offer to the community.”

And she is that positive mouthpiece at Concordia College Alabama, where she reaches out to the community and relays how the school is changing the makeup of Selma and bringing something unique with its Christ-centered education.

Taylor said its her job to show the community — and the world — that Concordia is a viable institution and a place to get a good degree.

She does this by writing press releases, newsletters and advertisements for the school and being an example to students on campus.

Like other movers and shakers her age, Taylor’s heart, she said, is to see Selma become a place where everyone can reach their highest potential and she believes Concordia can be that gateway for the community.