Meeting will give hunters a chance to ask questions 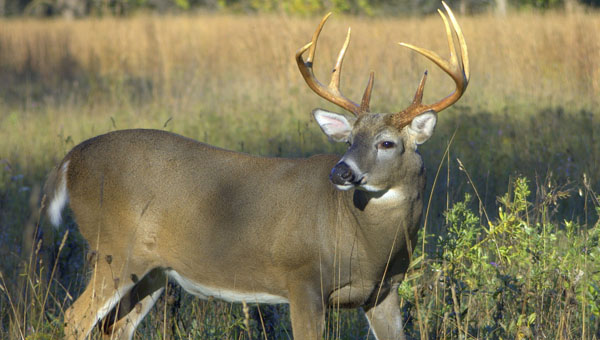 There are several new regulations coming for the 2013-2014 hunting season. On Thursday, Aug. 1, hunters will get an opportunity to ask questions to members of the Alabama Department of Conservation and Natural Resources during a public meeting at the Central Alabama Farmers Co-Op, starting at 6:30 p.m. –Photo Courtesy of Alabama Black Belt Adventures

Hunters and outdoorsmen will get an opportunity to learn and ask questions about new hunting regulations Thursday, Aug. 1 during a public meeting at the Central Alabama Farmers Co-Op.

The meeting will start at 6:30 p.m. and will feature officers from the Alabama Department of Conservation and Natural Resources, who will be notifying those present about new changes in hunting regulations.

“There are several changes that are coming up for the 2013-2014 hunting season, mainly concerning dove, deer, and turkey and we would like to explain those changes and answer any questions from the hunters that they may have,” Conservation Enforcement Officer Sgt. Joe Johnston said.

Johnston said it is important for hunters to understand the rules, which is why he says this meeting is such a great opportunity to gain clarity and eliminate any doubt on how a rule is enforced.

Johnston said that meetings like the one at the Farmers Co-Op next Thursday come around every few years, generally when changes to hunting regulations are made.

“Most people, especially the people that have been hunting for a long time, they are very familiar with the regulations,” Johnston said. “That’s why changes mess things up a little bit because people are so used to doing things the old way.”

The overall goal of the meeting is to make sure all hunters get their questions answered, Johnston said.

“We want to answer everyone’s questions so everyone will be on the same page and everyone will know what the game wardens are looking for also,” Johnson said.

Although fines depend on the offense or regulation not followed, many of the fines are progressive, meaning if a violator continues to not follow the rules he or she could lose their hunting license for a few years.

“Normally, when we have major changes come up we try to give people the benefit of the doubt,” Johnston said. “There may be a lot of warning tickets written, just letting them know that things have changed. Usually for the first year or so, we do that. After that, things tighten up a little bit.”

The meeting comes before dove season, which starts in September, gets underway and months before deer and turkey season.

The Farmers Co-Op will also be hosting an alligator hunting meeting on Saturday, July 27 at 10 a.m. where tags will be handed out.

Hunters that won a lottery to receive a tag are required to be at the meeting to receive their tag.

Alligator hunting in Alabama is only allowed after sunset until sunrise on six days, Aug. 15 through Aug. 18 and Aug. 22 through Aug. 25.

Southside’s Je’von Hall dribbles to the basket against a defender from Madison Academy during last season’s Class 3A state championship... read more