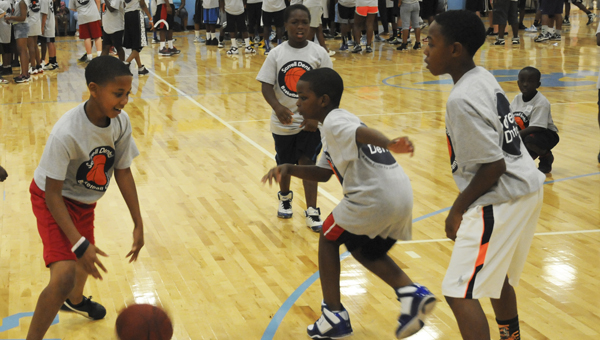 Campers at the Sarrell Denter Center Basketball Camp take part in drills led by members of the University of Alabama basketball team. A total of 315 campers, ages 5 to 18-years-old, took part in the free event. Each child received a t-shirt and a camp photo and had a chance to get autographs from the Alabama players.–Daniel Evans

It is not every day that local children get a chance to learn the game of basketball from University of Alabama basketball players, but on Saturday that was the case at the Sarrell Dental Center Basketball Camp.

“I just want to show them through hard work anything is possible,” Releford said. “If they work hard. they can do whatever they want to do in life.”

Steele now works for Sarrell Dental Center as the Community Outreach Manager.  He said he wanted to teach campers drills they could use beyond the camp.

“We can’t teach them how to be great players in this one camp, but we can give them the tools,” Steele said.

The players said it is always fun to give back  and share how they’ve gotten where they are.

A total of 315 campers took part in the event and received messages from players about staying in school and following the right path.

“You’ve got to stay in school. You’ve got to stay off drugs. You can’t bully people,” Jeff Parker, the CEO of Sarrell Dental Central said, when asked what the camp’s message was. ”We want you to take care of your teeth too, but this message will resonate with the children today too: Be a leader.”

Steele said the camp was an opportunity to reach out and help kids that may not have a positive influence in their life.

“Understanding that through sports and by doing the right thing, there is a way to better yourself,” Steele said. “A lot of kids in these areas may not get a chance to get that positive influence all the time.”

The players said giving back to the community is something they find very important.

“It is definitely big because I was in the same shoes as them. I came from a rough neighborhood,” Releford said. “It is always going to make their day and give them something to look forward to and give them positive energy.”

Each camper had an opportunity to interact with the players one on one at group teaching stations.

There was even a halftime show, led by Dagostino and his son Blue, who did footwork drills to entertain the campers.

All campers received a free t-shirt and camp photo. There was also an autograph session at the end of the camp.