No leads in Selma girl’s disappearance 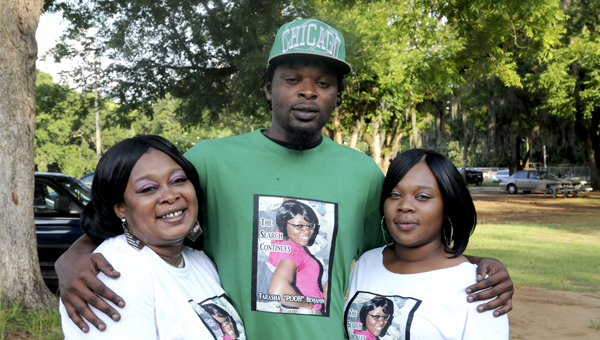 (Left to right) Regina, Clyde and Okeemia Benjamin gather with family members at Bloch Park to remember the disappearance of Tarasha “Pooh” Benjamin, their daughter and sister. –Sarah Cook

Three years after her disappearance, no leads have been made in the missing person case of Tarasha “Pooh” Benjamin.

Benjamin, who was 17 the date of her disappearance — June 26, 2010 — would be 20 today. Last seen going to the flea market on Cecil Jackson Bypass at around 9:30 a.m., she left no trace or clues of her whereabouts behind.

After her daughter didn’t called home for several hours, which Benjamin said was unusual, she alerted the Selma Police Department.

“The whole community searched for her after that. We were out on the streets — everywhere,” Benjamin said.

The same day as her disappearance, authorities found the truck Tarasha was driving abandoned on the Cecil Jackson Bypass. However, there was no sign of Tarasha and her cell phone was missing.

Bob Lowery of the National Center for Missing and Exploited Children said the organization sent several search units to Selma after Tarasha had been missing for several weeks. After thoroughly searching the area, Lowery said their efforts came up short.

“Since her initial disappearance, we sent our search and rescue teams down there to help — they’re the best in the country,” Lowery said. “The longer someone is missing the more we are concerned about their welfare.”

Benjamin said there was one lead causing the family to believe Tarasha may be in Florida, but after visiting the state and passing out fliers, no new information was gathered. And although no leads have been made, Lowery said the search will not end.

“We’ve seen remarkable stories and other cases remind us that we can’t assume the worst until we know for certain. We will never close a case until that child has physically been found,” he said. “The longer she’s missing, the hope does seem to fade, but it never really goes out.”

Benjamin shared a similar sentiment, saying that she has faith that Tarasha will return home.

Tarasha is 5 feet 2 inches tall and weighed 125 pounds the date of her disappearance. She has black hair, brown eyes and “Pooh” tattooed on her upper right arm. The public is urged to call 1-800-THE-LOST or the Selma Police Department at 874-6611 with any information regarding her whereabouts.

After waiving an appearance at her arraignment and filing a not guilty plea, LaTanglia Williams had her court date set... read more