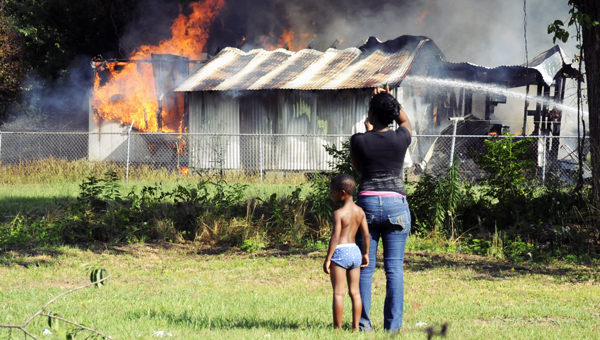 A shed behind a home in the 2700 block of Eisenhower Street in Selmont went up in flames around 4:30 p.m. Wednesday near Tipton Middle School. The shed housed several gasoline cans and containers that, once they caught fire, made a loud noise, prompting neighbors to call 911. Above, neighbor Kendra Hurry and her son watch as the fire engulfs the nearby shed. –Ashley Johnson

SELMONT — Residents in the 2700 block of Eisenhower Street, a street in the Selmont area close to Tipton Middle School, came out of their homes to watch a shed fire that had flames reach close to two stories high.

Neighbors and those who were nearby claim to have heard a boom or something that sounded like an explosion. Fire officials say that sound could have been flammable items in the shed such as gas cans or a gas tank in a lawn mower.

Patricia Hurry was on the 2700 block at a friend’s house watching television when she heard a loud boom Wednesday sometime around 4:30 p.m.

“I heard a loud boom and I called 911 and told the lady it sounded like a bomb,” Hurry said, who ran to her daughter’s house to grab her daughter and grandchildren at the house next door to the shed fire. “I ran from where I was to my daughters house because I didn’t know where a gas line might be at so I wanted to come and get my babies out of the house.”

There were no injuries reported Wednesday during the fire according to the first responders. The Selma Fire Department and the Craig Volunteer Fire Department were both dispatched to the scene.

Annie Dunklin, owner of the shed, said she was cooking in her house when a neighbor ran in to tell her the house was on fire.

“I had just got home and my neighbor told me the house was on fire,” Dunklin said. “I am just glad it was the shed and not the house.”

Selma Fire Department Battalion Chief Joe Phillips said the cause of the fire is under investigation, but it seems it was accidental.

“There was no explosion, but the neighbors could have heard a boom because there was some flammable containers inside,” Phillips said. “As of now it appears to have been accidental. Everyone was home and they just weren’t out back, they were inside the house.”

World War II veterans gathered at the Vaughan-Smitherman Museum Tuesday as part of a special reception. Before entering the program,... read more