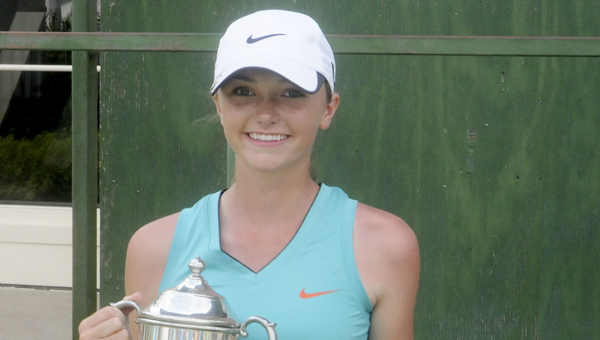 Sanders had a one shot lead after round one and was able to widen that lead with two birdies and limited mistakes in her second round. Sanders, the only girl on the Chilton County High School golf team, shot 77-74 for an overall total of 8-over, 151. She won the 13-15 age group, as well as the overall girls’ competition.

For winning, she took home the trophy and an autographed picture from 2012 Masters champion Bubba Watson, a previous winner of the Bud Burns Championship.

“It was really fun, and I just want to thank my mom and dad for making it all possible and bringing me up here,” Sanders said, who birdied holes five and eight during the final round.

In the end, Sanders played so well that a double bogey on her final hole ended up being meaningless.

The Clanton native said it felt good to win the overall championship despite not even being in the older age group of participants.

“This was probably the first time,” Tommy Burns said when asked if a younger division participant had ever won the overall girls’ competition before. “That’s not unusual in golf. Once they get 15-years-old, they can hit it so far, they can play.”

Sanders is not sure how many tournaments she has won through the years, but she knows how long she has been working on her game.

“Ten years,” Sanders said. “I played my first tournament when I was five in Auburn.”

Hope Bishop finished second overall, shooting 78-77 for a two-day total of 12-over, 155. She came into day two only one shot back of Sanders, but failed to birdie any of the holds and  carded five bogeys or worse. Third overall was Katelyn Gilmore, who looked like she might make a run after a birdie on No. 1. Unfortunately, that was Gilmore’s lone birdie of the day.

“This is by far the best tournament. We’ve had our highest number of entries for the girls,” Burns said. “Twenty-eight girls played all the way from the tip of north Alabama to the Florida panhandle. It grew probably about 50 percent. It was just a great tournament. “

Brooke Singleton finished second to Sanders in the 13-15 age division by shooting an overall score of 162. Anna Reid was third with a two-day total of 171.

In the 16-18 age group, Bishop help off Gilmore, who was four shots behind with a score of 159, and Ashton Maddaloni, who shot 160, to win her division. Maddaloni had one of the stranger scorecards during the tournament. She made one of two eagles the entire 28 player field made, but four triple bogeys ended up being too much to overcome.

A short rain delay stopped play on Tuesday. Players were pulled off the course for about half an hour because of a thunderstorm nearby, causing tee times to be pushed back thirty minutes.

Players came from Tennessee, Florida and Georgia to take part in the tournament, with 125 total players competing in the boys and girls’ competitions combined.

“That’s the most we’ve had in probably six years,” Burns said referring to the number of entrants. “We grew probably 20 percent this year. Going on the Internet has helped us tremendously. We had approximately 950 emails that we sent out to all the junior golfers of Alabama. Every one of them got a weekly bombardment of information. “