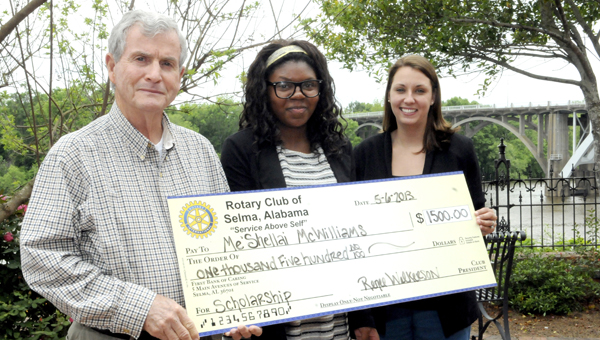 Me’Shellai McWilliams, a senior at Selma High School, was one of seven distinguished students from area schools who was chosen by the school’s guidance counselors to compete for a $1,500 college scholarship from the Selma Rotary Club.

Each student nominated for the scholarship had to give a presentation to the Rotary Club explaining why he or she deserved the check. And although each speech was impressive, Mike Jung, scholarship committee chairman, said it was McWilliams’ that stood out the most.

“She’s a very bright young girl and I congratulate her on this achievement,” Jung said.

After receiving the check, McWilliams said she was both grateful and overjoyed.

“This just means so much to me,” said McWilliams, who plans to study philosophy and law at the University of Alabama in the fall.

McWilliams said she wants to become an international corporate attorney. Through her involvement with Selma High School’s debate team, she said she developed a heavy interest in law.

“When I make a goal, I know I will accomplish it,” she said.

McWilliams stayed involved both in school and throughout the community while in high school. She served as vice president for Selma High’s National Honor Society and was a member of the school’s Student Government Association, Future Business Leaders of America, Fellowship of Christian Athletes, Dallas County Distinguished Young Women and a host of others.

Her mother, Millie McWilliams, who attended the presentation of the Rotary Club’s scholarship to her daughter, said she couldn’t have been more proud.

“She’s been able to make so many friends not only at Selma High School, but also in all the other area schools because she’s stayed so involved,” Millie said. “That’s what I envisioned for my daughter when she was little, to grow up to be a woman who could get along with everyone and have God as number one.”

McWilliams said she’s excited to reach all of her goals and succeed in her studies.

“I’ve really enjoyed everything I’ve been a part of,” she said. “I know I can, and will, achieve my goals.”

Coming Soon: Residents will soon be able to access more than 15,000 titles from the Selma-Dallas County Public Library with... read more