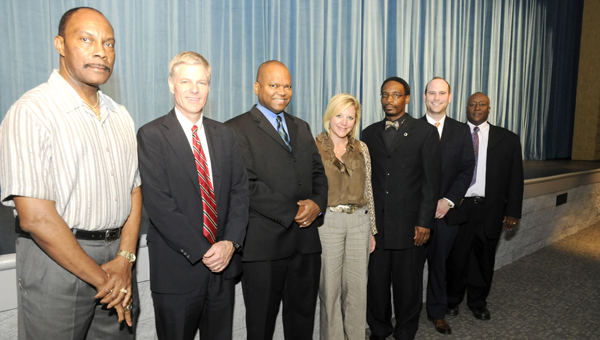 Law Day is a national day of observance dedicated to teach people the young and old about the entire legal system. For some, it is to inspire youth to enter into the legal profession and for others it is an education about what life is like once entering into the legal system as a criminal.

Alabama Gov. Robert Bentley signed Law Day 2013 Proclamation in March for it to be celebrated Wednesday, May 1.

Several Judges and other members of the Dallas County Bar traveled to Morgan Academy and Selma High School Wednesday for an assembly to present the students with the theme of this year’s law day — equality for all.

“I know there are some of you sitting here today who will be the future lawyers, judges, probation officers and work in law enforcement,” District Judge Bob Armstrong said to the students in the Selma High auditorium along with speakers 4th Judicial Circuit Court Judge Marvin Wiggins, 4th Judicial Circuit District Attorney Michael Jackson, Judge Collins Pettaway and members of the local bar association Woody Jones and Jana Garner. “I want some of you who are out here who are thinking about the legal profession to go for it go and be lawyers, go to law school, go to law enforcement academy do whatever you need to and have the heart to treat people fairly and with equality.”

The theme of the 2013 Law Day, “Realizing the Dream: Equality for All” is based on the speech, “I Have a Dream,” delivered by Martin Luther King, Jr.

Garner, who helped organize the Law Day assembly told the students they should, “not let discrimination of others be a barrier to all of the progress we want to see in our community,” and read them lyrics from a Black-eyed Peas song, “Where is the Love.” She challenged them to put aside their differences and judgments about other races, religions and economic statuses so that the world would be a more just place.

Residents of the town of Orrville are gearing up for the first ever town Founder’s Day Saturday. The event will... read more