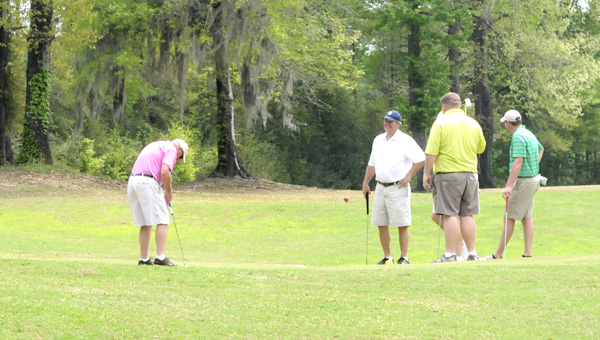 The Selma-Dallas County Chamber of Commerce held its annual golf tournament Wednesday where funds raised will go towards the betterment of current area businesses and the recruitment of new ones.

Teams of three took to golf carts at the Valley Grande Golf Course at Ocmulgee and teed out from under a Pepsi Cola cup, shot for a closest to the hole competition, all in addition to playing a normal, 18-hole round.

“This draws everybody together and it draws businesses from all over the city and the county,” Robert Massey, with Pepsi Cola, a sponsor of the event,  said during his play at the tournament.

“You also see people you don’t get to see all the time, and it brings some much needed exposure the chamber.”

Steve South, with Bama Budweiser, another event sposor, said he appreciated the presence of community leaders like Selma Mayor George Evans and Dallas County Probate Judge Kim Ballard at this year’s event — something, he said, that was not there several years prior.

Of the several challenging shots in the tournament, the Pepsi Cup seemed to be the most popular. While some players claimed they did not fair well on the closest to the hole challenge or a hole where players had to hit the ball into a circle in order to win prize money, several said the Pepsi cup shot helped their score.

“We got a two on a par five,” Selma Fire Chief Michael Stokes said about the Pepsi cup, as he mentioned the fun he and his team members were having, spending their Wednesday at Valley Grande Golf Course and mingling with other chamber members.

Chamber of Commerce director Sheryl Smedley said her goal for the event each year is to have fun, but more importantly, raise funds for the department.

She added that all the revenues will then go towards programs hosted by the chamber — things like small business workshops.