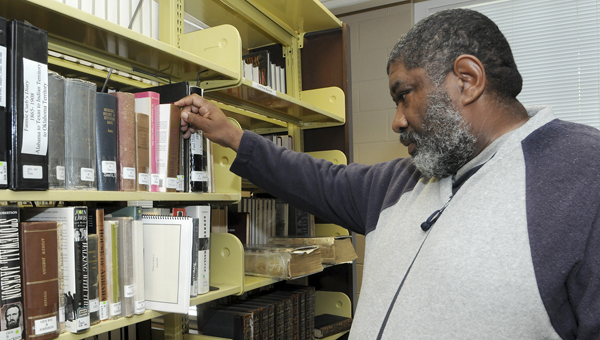 Selma resident Johnson Blakes, member of the Selma-Dallas County Public Library since 1953, said he has always enjoyed visiting the library, even when it just consisted of one small building. Blakes is currently using the library’s resources to earn a degree in information technology. –Sarah Cook

Selma resident Johnson Blakes is no stranger to the Selma-Dallas County Public Library. A member since 1953, Blakes said he remembers coming to the library as a 13-year-old boy and sifting through books, always finding something to illuminate his imagination.

As a part of National Library Week, Blakes was spotlighted as one of the library’s biggest cheerleaders. Without the library, Blakes said he wouldn’t have been able to further his education.

“I like to come here about twice a week,” Blakes said. “The library has helped me in so many ways — resumes, research and just bettering myself.”

Currently, Blakes said he is working toward earning a degree in information technology through online classes at Colorado Technical University. Without the resources available at the library, he said earning his degree wouldn’t be possible.

After serving in Desert Storm, Blakes began working with computer systems, but was never able to receive a formal degree crediting his work.

“I used to work with computers when I was in the service, but I never had any type of certificate that said I had a degree in information technology,” he said.

Along with using the library’s computers and many other resources, Blakes said the staff has also assisted him in furthering and improving his education.

“They make you feel like this is a family more than just a public library,” he said. “If I come in and say I need a book on a certain subject, they always help me and direct me in the right direction — it has that hometown feel.”

And Blakes is not the only Selma resident who has used the library to gain higher education. Becky Nichols, library director, said she has seen many residents come through the library and earn their degrees in various fields.

“We house adult education, which is a very unique piece of this public library,” Nichols said. “Very few libraries in the state have a component that educates those who have dropped out of high school or those who are having difficulty with the high school exit exam.”

As for his favorite aspect about the Selma-Dallas County Public Library, Blakes said it’s hard to choose because, “there are just so many great things going on here.”

“I feel like other libraries should take notice of Selma’s library,” Blakes said. “Without this library, this community wouldn’t be the same.”