Fighting cancer a mile at a time 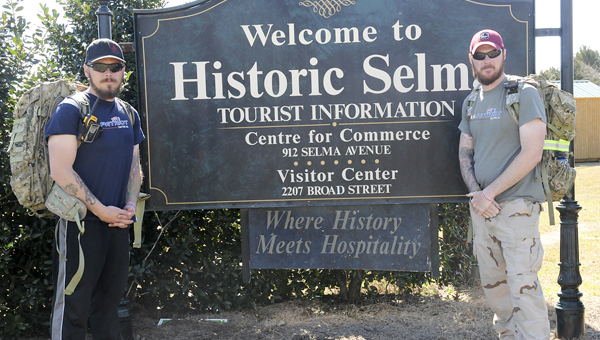 Wayne Whitbeck, left, and James Allred, right, walk through Selma on Tuesday in a fight against a new enemy — cancer. The two are walking cross-country in symbolic stand against the disease and hoping to raise money for research. –Ashley Johnson

James Allred and Wayne Whitbeck walked through Selma for the first time on Tuesday. They walked 15 miles off of Highway 22 towards the city out of Valley Grande, “One step at a time” in a unique fight against cancer where they will walk all the way to San Francisco.

The two started Ruck For A Cure last year, which is a non-profit organization, after they were both drill sergeants in the Army and Whitbeck’s father was diagnosed with cancer.

“I just wanted to do something to help my dad and do something to help other people in general so we came up with this organization about a year ago,” Whitbeck said, he and Allred standing on the side of Highway 22 in front of the Welcome to Selma sign heading toward Highland Avenue.

Allred wore army camo pants and had their ruck sack in hand — army lingo for their backpacks, which they have carried with them some 500 miles now from Myrtle Beach, SC. They plan walk across the U.S. another 2,500 miles to San Francisco, Cali. On Wednesday and Thursday of this week they plan to walk through Demopolis and on to the border of Mississippi past that.

Their website ruckforacure.org and their Facebook fan page let them log their mileage and blog about their journey. Their website explains why two veterans said goodbye to the military and, “set their sights on another type of enemy.”

“Nothing stands between us but 3,000 miles of battlefield and a disease that needs some serious attention,” their site says.

But according to Whitbeck there are several other enemies out there on the highways along their journey.

“The rain [Monday] was just nasty and that was my day to walk,” Whitbeck said. “But we are getting nicer weather so things are looking up.”

The two joked about their enemies on the road and laughed about drivers swerving not to hit them while texting and even their first run-in with a police officer who wanted to make sure they were not causing trouble.

Their journey began on Feb. 4 on World Cancer Day and they hope to end 3,000 miles later and one step closer to beating cancer.