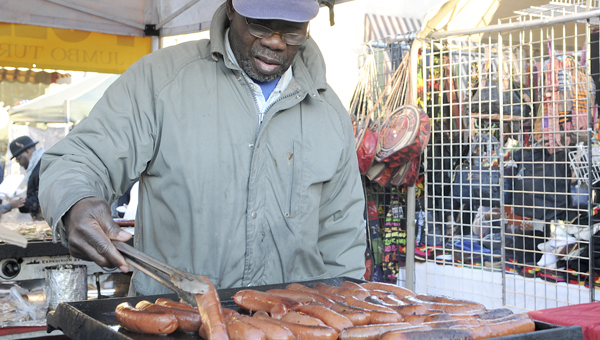 Long after U.S. Vice President Joe Biden, U.S. Rep. John Lewis (D-Ga.) and Selma Mayor George Evans left the stage that was set up on Water Avenue at the foot of the Edmund Pettus Bridge Sunday, March 3, and after thousands of people marched over the Alabama River in commemoration and continuation of the civil rights movement, hundreds of people flocked to Lauderdale Street where smells of funnel cakes, polish sausages and grilled turkey legs filled the air.

Sunday saw dozens of vendors lining the streets selling everything from fried meat on a stick to sunglasses, CD’s, Obama T-shirts and fashion accessories.

And those vendors said they had more success on Sunday than during Saturday’s festivities set up on Water Avenue.

Johnnie Jones, a T-shirt vendor who traveled from Atlanta said he comes to Selma each year to celebrate the bridge crossing and also to sell some merchandise. Jones said his most popular item of the day were the Obama T-shirts.

On another side of the street was Aaron Sheperd of Shep’s Chicago Style Polish, flipping sausages over a hot skillet before lining them with toppings and selling them to hungry visitors.

Sheperd sells Chicago-style polish sausages as well as jumbo turkey legs, which were a huge success he said, noting that they had just sold out.

Sheperd has been coming to Jubilee as a vendor for 12 years.

“It’s been good,” Franklin said of business this weekend. “[Sunday] has been a much better day than [Saturday].

Franklin suggested the upswing in business was probably from the weather and due to the fact that people were allowed free access to the area on Sunday.

“I understand that people could come in free, and yesterday they had to pay, so I think a lot of people waited until today to come in,” Franklin said.

Dermaus said with this being their first time as vendors at Jubilee, he was impressed with how friendly the people were.

Southside senior has a future she’s ‘accounting’ on