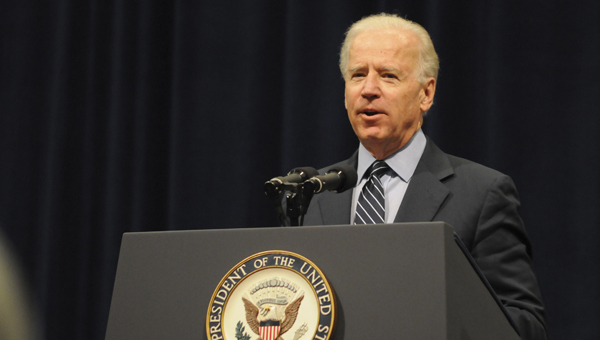 While unity was the theme of the event, emotions of strength, courage and perseverance were also felt as Vice President Joe Biden stepped up to the podium to speak at the 2013 Martin Luther and Coretta Scott King Unity Brunch Sunday at Wallace Community College.

During his speech, Biden addressed those who fought for the right to vote decades ago as they marched across the Edmund Pettus Bridge, and those who continue to fight today.

“You all raised your voices and risked your lives for all those who were voiceless and in the shadows,” Biden said, addressing more than 800 people packed in to the Wallace Community College gymnasium. “Like many other Americans, in other parts of the country, I was in awe of what you did.” 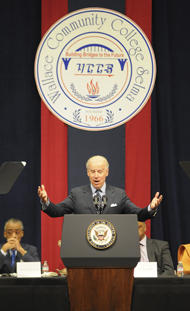 Along with Biden, the Rev. Al Sharpton and the Rev. Jesse Jackson also spoke at the brunch, delivering messages of hope for not only the African American race but also the human race.

“We are not here for a commemoration, we are here for a continuation,” Sharpton explained. “There are some who are trying to make us march backwards across that bridge and we can not allow that to happen.”

During their speeches, several spoke on issues that are affecting the nation today — mainly Section 5 of the Voting Rights Act and the debate before the U.S. Supreme Court about the section’s constitutionality.

Jackson said without Section 5, which mandates federal approval for some states before redistricting voting precincts, voting impact would be greatly affected.

“What we’ve won by legislation and litigation, we would lose by judicial schemes,” Jackson said. “We would have more gerrymandering and annexation. The impact of voters is at stake.”

Sharpton reiterated this message, saying in order to maintain the right to vote, citizens must take to the streets much like they did in 1965.

“We need to re-engage in the civil rights struggle that is necessary today. We must stand up every day and all day,” Sharpton said. “We got in the streets and we will go back to the streets before we let you turn the clock back on our voting rights.”

Several local leaders were also at the annual event Sunday morning. All said they hope Biden, along with other leaders in Washington, hear the voices in Selma and continue to remember what happened 48 years ago on the Edmund Pettus Bridge.

“There are so many visitors here and we all just want to hear what the vice president has to say about what’s going on in our country,” Selma City Councilmember Sam Randolph said ahead of the vice president’s remarks. “There’s some big issues and we deserve answers.”

Along with local and national leaders, residents from across the country gathered to hear what the vice president had to say. After the brunch, many said they were moved by the empowering messages that were delivered.

“Obama was here a few years ago so it was time for the vice president to come,” Tuskegee native Elaine Harrington said. Harrington said she attends the Jubilee every year. “There were a lot of challenges made up on that stage and I hope we’re not just here for the fanfare, but instead challenge what’s wrong.”

Will Dodd, a student at the University of Alabama, said he traveled to Selma for the Jubilee weekend to hear Biden speak and to be a part of something bigger than himself.

“I’m really in awe,” Dodd said. “When they walked across that bridge 48 years ago it wasn’t just for the right to vote, it was for equality. I think Biden did a good job of speaking, not just for the races but for the genders as well.”

Like Sharpton and Jackson, Biden said the fight for equality is not over. As a nation, we must continue to fight for justice, he said.

“We’ve come too far together to turn back,” Biden said. “Too may people struggled and died to make it possible for every American to exercise their right to vote. We still have a lot of work to do, but I think it will be a lot easier than it was 48 years ago for one overwhelming reason — because what you all did here 48 years ago changed the hearts and minds of the vast majority of American people. That’s why I’m convinced we will prevail in this new fight for voting rights.”