The Bridge Crossing Jubilee is for some a pilgrimage, bringing them from all across the globe to Selma and for others it is an annual family reunion right in their backyard.

For many Selma locals, participating in the reenactment marches is somewhat of a tradition, bringing families together again every year in March to remember and thank those they knew who were a part of Bloody Sunday in 1965.
For elementary school pals Aine Oquinn and Alex Hadler, participating in the bridge crossing meant celebrating their relationship — best friends, one black and one white. 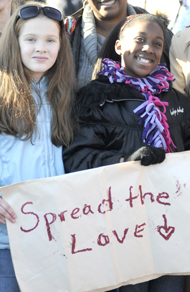 The friends came with their parents from Birmingham after they learned about Selma and the Bloody Sunday March in their home school program.

“I cannot imagine living a long time ago when their [friendship] wouldn’t have been possible,” Kristina Oquinn, mother of Aine said about her daughter’s friendship with Alex. “It just seems so foreign to me, that I wanted to celebrate that we don’t have that anymore.”

The two friends agreed the experience was, “very special,” and others who spent their Sunday listening to Vice President Joe Biden and others seemed to share the same feeling.

Another group came as far as Alexander City, but their roots are much farther away than that. A Latin American group came to march in Selma, marching for justice in immigration laws.

Melvin Orozco, an 17-year-old student said it was great to experience seeing people come together to celebrate one cause — civil rights.

“Just being here and seeing everybody, it makes you feel comfortable seeing people come together for a reason,” Orozco said, and mentioned that things like the fight for voting rights in 1965 in Selma are actually happening again in Alabama today. “It’s really tragic and obviously some of the things that happened here a long time ago are happening again right now.”

Civil rights leaders such as Al Sharpton and Rev. Jesse Jackson spoke to crowds about Section 5 in the U.S. Constitution and how it is now being challenged, 48 years after the Bloody Sunday march, in the U.S. Supreme Court.

Arguments were heard Wednesday in Washington D.C. in a case brought forth by officials in Shelby County, questioning the need for the protective provisions Section 5 provides.