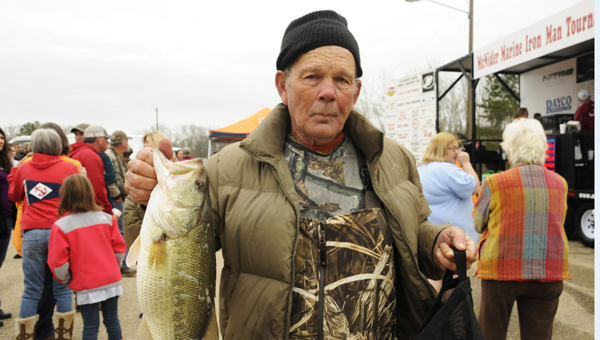 Big Bass: Earl Richie poses with his bass fish at the 2013 Sav-A-Life Bass Tournament. Richie was one of many fishing enthusiasts who came out to support Sav-A-Life, a non-profit organization that encourages those in pregnancy crisis situations to choose life over abortion. –Sarah Cook

Thirty-six boats sailed the Alabama River Saturday for one cause — to save a life.

Sav-A-Life, a crisis pregnancy center, held their 2013 Bass Tournament fundraiser Saturday with proceeds benefiting their many programs, which encourage mothers to choose life instead of abortion when faced with a crisis pregnancy. More than $16,000 was raised.

Each participant in the tournament had the chance to win $2,000 if they caught the largest bass.

Pat Chambers and Josh Young were the fishing duo who claimed the large cash prize with their fish weighing in at a total 17.04 pounds.

In second place with fish weighing in at 12.03 pounds, Scott Phillips and Mike Cutler won $1,000. Justin Mott and Matt Salter came in third place with a total of 9.11 pounds and winning $500.

Ernie Skinner had the biggest single fish weighing in at 5.62 pounds.

Jennifer Dobbs, director of Sav-A-Life, said she was happy with how many people showed up for the fundraiser.

“The river rose about 8 feet today so there haven’t been a lot [of fish] caught, but we had 36 boats so we had a really good turnout despite the weather,” Dobbs said. “We’re trying to make this an annual event.”

Dobbs said it’s important that people are aware of Sav-A-Life and its programs because when faced with a crisis pregnancy, Sav-A-Life provides necessary resources.

“This year we had 151 clients,” Dobbs said of the center, which has been operational since 2000. “Seventeen admitted to wanting abortions and 14 of those changed their minds.”

Dobbs said no family should feel like abortion is the only option and at Sav-A-Life, those in crisis pregnancies are provided with the option of life.

“At the center we give them hope and life choices,” she said. “No women wants to have an abortion, they just need to know that there are people out there that want to help them through this time.”

Steve Craig, tournament organizer, said it was a blessing to see how many people came out Saturday in support of Sav-A-Life, and he knows that the fundraiser will make a difference in several lives.

“This is pretty miraculous,” Craig said of the tournament. “I thank everyone who joined us today and everyone who sponsored it. Without them, this wouldn’t have been possible.”