Concordia College is equipped with diverse group of students 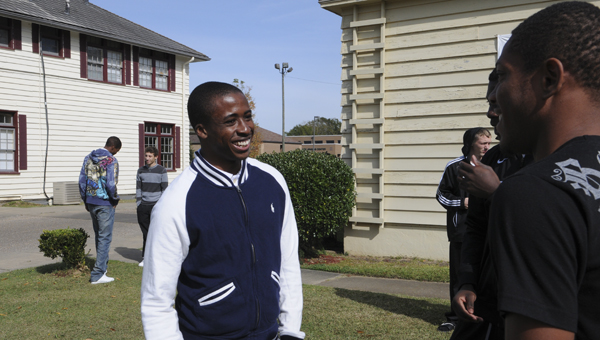 Those who visit Selma understand it is truly unique, a place unlike any other. Some may go as far and say Selma is like it’s own country, equipped with it’s own customs, accent and history. The international students at Concordia College Alabama could be counted among those who would agree.

Just a few miles removed from downtown lies a whole new culture, unlike any other found in Selma. Concordia boasts 19 students who went through immigration just to attend college in Selma.

These students range in age from 20 to 29 and have traveled from Ethiopia, Ghana, Nigeria, Zimbabwe, Sudan, Costa Rica, Argentina as well as Trinidad and Tobago.

Alemu said it’s part of his job to seek out international students and recruit them for Selma. A process the Ethiopian native is quite familiar with as he was called to Selma himself nearly four years ago by the president of Concordia College, the Rev. Dr. Tilahun Mekonnen Mendedo.

“I finished my studies in Ethopia at the same school where the president of this school went. After finishing my studies I went to Norway in Europe, and [Mendedo] came to [Selma],” Alemu recalled. “I got a scholarship in Norway and did a masters degree in philosophy. I stayed for three years in Norway. When I finished my master’s I went back to Ethiopia.”

Getting a scholarship and traveling to a foreign country by himself, where everything from the food to the language is completely different, is something Alemu experienced when he moved to Norway and then to the United States, which makes him a great asset to the students who are now going through a similar situation.

Alemu said getting just one student for the international program is a huge production —involving Homeland Security, the embassy of the student’s country, immigration offices, the U.S. point of entry and more — a huge effort, Alemu said is vital to the mission of Concordia.

Scholarships are what attract international students, both academic and athletic.

“It is very hard to get somebody who pays the full amount of the fee here, because the currency of their country is just very low, so it’s very hard,” Alemu said, adding that they have four different levels of scholarships available to international students.

“Most of them are from Caribbean countries and Africa,” Alemu said. “We are trying to reach farther to Asia, but it is very hard to recruit those students.”

So how do 19 students from foreign upbringings, cultures and customs adjust to the cultural climate of Selma?

“We have different programs to help international students adjust to
this culture. We have international Christmas dinner and international
week,” Alemu said. “I think they feel like Selma is the smallest city. Smaller than where
they came from. It’s just because there’s no place to go to enjoy like the Starbucks or theater. It’s very hard for them to be able to drive to Montgomery or Prattville. It’s very hard because they don’t have a transportation system here.”

Concordia College junior Emnet Myzeyen, from Ethiopia agreed and said she misses Ethiopian food and culture — something she hasn’t been able to find in Selma.

Emnet left her home country when she was in high school to attend a boarding school in Mississippi, and after receiving a scholarship she moved to Michigan and finished her junior and senior years there.

From Ethiopia to Mississippi to Michigan and now Selma, Emnet said she has had her share of culture shock and that it’s normal to get homesick.

“I miss my family. We are really close with each other. I was too young when I got here, so I miss them and that is the hardest thing for me,” she said, adding that her teachers have helped fill that role since she’s been at Concordia. “They are like my family. I can talk to them, and if I have a question about anything, they are really open minded to help me with my English and everything. I really appreciate them.”

Emnet said the hardest part about being an international student in Selma is the fact that they can’t have jobs.

“I’m a student worker and we don’t get paid for that. That’s the main issue. We can’t work outside of the campus, but if we work here we can’t get paid,” she said, adding that she and several other international students try to fill that void with volunteer hours.

“Right now we’re trying to tutor math in the high school and we are also in the honors student team and different types of student activities that can help us stay busy and get to know other people,” Emnet said.

What she said she likes most about Concordia is that, “Everybody is open minded to talk to you and learn your culture, and I like that. Also people are very, very social,” she said, adding that even though she gets homesick, she’s happy to be getting her college degree in Selma. “I think it’s just God’s plan. I applied to different schools and I got accepted [to them], but this is my choice to be here.”

Emnet said she plans to graduate with a degree in business and computer science engineering, and eventually earn a master’s degree in business. She said she sees herself staying in the United States, but admitted she will probably move away from Selma.

Alemu said the best part of his job is to see the international students graduate.

“I enjoy helping people and I love to see when people are succeeding at what they are doing, so that’s my best part —to see them succeed,” he said, noting that the graduation rate among international students is 100 percent.

City-Wide Block Party fun for all

The Old National Guard Armory was filled with songs and laughter as children sang and danced with hand motions to... read more