Organization partners with schools to discuss impact of bullying 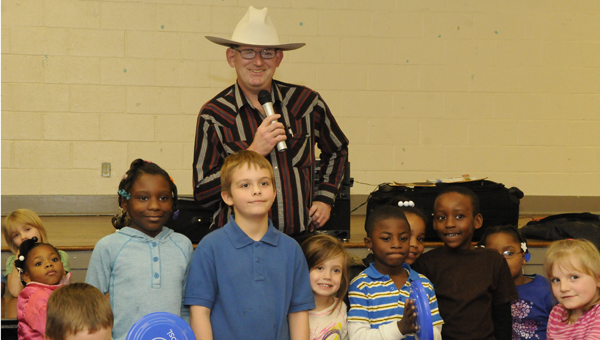 Students at Brantley Elementary School were reminded of the devastating consequences of bullying Friday when a special guest stopped by to share his story.

William Bowman, founder of Visually Impaired People, Inc., talked with students about a lifetime of bullying he has endured and how he took his hardship and turned it into a success.

“People have looked at me my whole life and judged me for being different,” said Bowman, who is legally blind. “People look at me differently because my eyes look different than yours.”

Bowman said as a child, he was often secluded simply because he was different. However, after graduating from Selma High School in 1985 and going on to study at Auburn University, Bowman said his life began to change because his confidence grew.

“You have to believe in yourself,” Bowman said to the kindergarten and first grade classes. “God made me for a reason, and he made you for a reason too — even if you are different.”

Through visiting schools throughout the region, Bowman said he hopes to put an end to bullying and teach children to accept one another.

“We want to reach as many schools and as many children as we possibly can,” Bowman said of the program. “And the kids, they really pick up on the message. Often times I’ll see them after the program and they remember me and what I talked about.”

Bowman also uses his vocal talents to convey his message. Friday, Bowman sang “Don’t you ever get tired of hurting me,” a country song that discusses the hardships of bullying.

“You have to learn to be able to react in a positive manner when people try to get you down,” Bowman said. “You can’t let people’s negative attitudes get in the way of achieving you dreams.”

VIP, a non-profit organization, specifically provides visually impaired people in Selma and Dallas County with the resources needed to overcome their disabilities.

Bowman said it’s organizations like VIP that remind people that they can still achieve anything they want to — even if they have a disability.

“Through these programs, I think we can really reach children and make them aware of why bullying is so harmful,” Bowman said.

Katrina McGrue, first grade teacher at Brantley, said she thought the program was very effective and delivered a message that all students need to hear.

“It’s important that they learn about bullying and know that it hurts their classmate’s feelings,” McGrue said. “I do see a lot of bullying, they pick on people that are different. I think they definitely got a good message out of this.”

The program has already reached more than 8,000 school children, Bowman said, and he hopes to reach more.