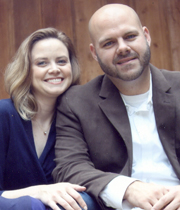 The prospective bridegroom is the son of Mr. and Mrs. Gordon Franklin Welch of Selma, Alabama.

She is a graduate of Mount Tabor High School in Winston Salem, North Carolina.

She attended Meredith College and received a B.S. degree in Business Administration. She is presently employed at Nordstrom in Charlotte, North Carolina.

He is a graduate of John Tyler Morgan Academy.

He attended Wallace Community College, Selma and Auburn University where he received a B.S. Degree in Information Systems. He is presently employed as a Business Systems Consultant for Wells Fargo in Charlotte, North Carolina.

The wedding will take place at 5:00 p.m. on Saturday, February 23, 2013 at Alexander Homestead in Charlotte, North Carolina.

Mr. and Mrs. Robert A. Munson, of Tallahassee, Florida announce the engagement of their daughter, Jorgianne LuisaTome’-Munson to Cody Hewston... read more