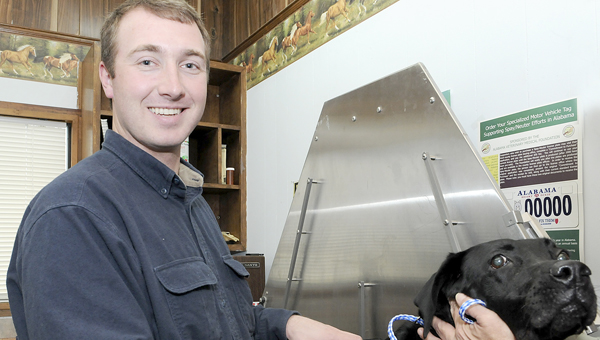 Justin Howard recently moved to Selma and will be serving as one of the veterinarians at the Selma Animal Hospital. Howard is an eastern Kentucky native and is looking forward to getting to know the community better and providing more services at the animal hospital.

Selma residents both human and animal can celebrate in the recent arrival of Selma Animal Hospital veterinarian Dr. Justin Howard.

“I’m really excited to be here,” said Howard, an eastern Kentucky native who recently graduated from Auburn University with a PhD in veterinary medicine.

While serving as one of the three veterinarians at the animal hospital, Howard said he would like to increase animal services and get to know animal owners better.

“It’s definitely a good opportunity to apply what I’ve learned and get into the practice,” he said. “I’m looking forward to getting to know people in the community.”

Before earning his PhD from Auburn, Howard received his bachelor’s degree from the University of Kentucky. After graduating from Auburn, he was offered the position of veterinarian at the Selma Animal Hospital.

“I’ve never lived in Selma before but I’m very happy to be here,” he said.

During his college years, Howard said he specifically developed an interest in large animals and he hopes to incorporate his knowledge into his Selma practice.

“I really enjoy working with large animals,” he said. “Hopefully we’ll be able to expand and offer more large animal services at the Selma Animal Hospital.”

Howard will serve as veterinarian alongside Dr. George Wood and Dr. Mark Lawrence.

Since this is his first full-time job coming out of college, Howard said he’s excited to get to know the area and serve Selma’s animal owners.

“I’m still moving my stuff in, but I’m very happy and excited to be here,” he said.

Instead of just one artist of the month, the Selma Art Guild is hosting three seasoned artists from Evergreen, Ala.... read more