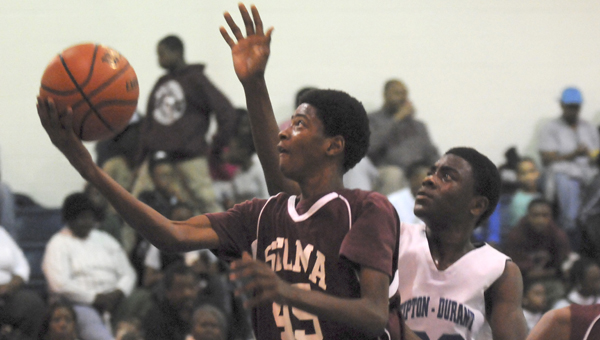 The Tipton Tigers kept it close early at home, but the R.B. Hudson Bulldogs pulled away in the second half for a 56-31 win on Thursday.

“The key to victory tonight was putting the pressure on Tipton,” Randolph said. “We forced a lot of turnovers by them and had a lot of transition baskets.”

The Bulldogs led 30-19 coming out of halftime, but Dequan Johnson scored under the basket and Darrell Riley hit a pair of free throws for Tipton (5-5) early in the third quarter to cut the score to 30-23.

But the Bulldogs responded by going on a 7-0 run, as Ladarius Woods and Fred Richardson both scored on transition layups, Erick Smiley scored in the paint and Woods added a free throw to make the score 37-25 with 2:26 left in the third quarter.

Jarvis Thigpen put a halt to the run with shot for Tipton and teammates Johnson and Keandre Rutledge closed out the quarter with shots to help the Tigers cut the lead back down to 40-29.

But the Bulldogs opened the fourth quarter on a 10-0 run that helped them secure the victory.

“My guys fought hard. We just got outhustled. They’re a little bit more conditioned than us, I guess,” Billingslea said. “It was a good effort from both teams.”