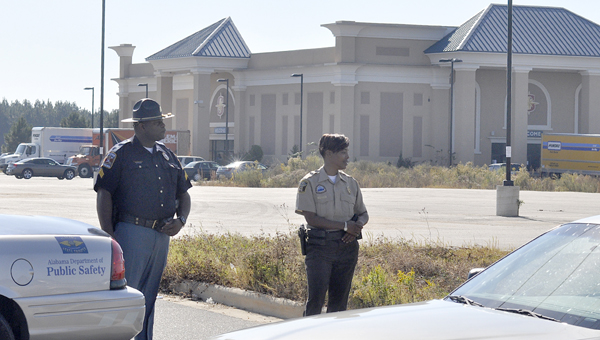 No access: Officers with the Alabama Department of Public Safety and the Lowndes County Sheriff’s Office block access to the Southern Star Casino in White Hall, as officials continued to seize an estimated 350 machines. --Fred Guarino

WHITE HALL — The Southern Star Casino, located in White Hall, has been shut down.

Friday, law enforcement agents from the Alabama Attorney General’s Office and the Alabama Department of Public Safety served search warrants on the facility and seized more than 350 machines and an undisclosed amount of cash.

In a press release from Alabama Attorney General Luther Strange’s office, the machines, along with the seized money, will be held as evidence and will be subject to a forfeiture procedure in the Lowndes County Circuit Court.

“Today’s actions are the culmination of an investigative process over the last several months,” Strange said. “From my first day in office, I have worked to ensure that illegal gambling laws are enforced consistently across the state.”

“Until the Legislature acts to create an effective deterrent for large scale gambling, individuals will continue to engage in illegal gambling activity and openly defy the law,” Strange said. “These individuals stand to make millions of dollars in illegal gambling profits while risking only a slap-on-the-wrist misdemeanor charge.

“The Legislature must change that weakness in our law and create a badly needed deterrent for large scale illegal gambling by increasing the penalty for operating an illegal slot machine casino to a felony,” Strange said.

According to a release, the Lowndes County Sheriff’s Office also participated in Friday’s operation, providing security while the search warrant was being executed.

As holidays close in, Selma Food Bank asks for donations