As holidays close in, Selma Food Bank asks for donations 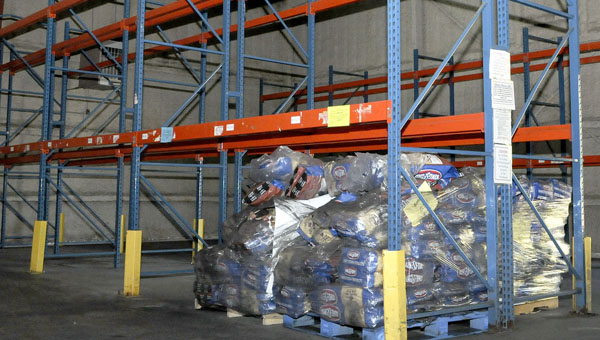 The Selma Area Food Bank has seen donations drop by 35 percent this year. Warehouse manager Curtis Shaw said the shelves in the main warehouse, shown here, that would normally be stocked with food are currently empty or filled with extra pallets. The walk-in freezer and cooler are in a similar condition. --Katie Wood

November has arrived, and with it comes a season of thanks and a time many Americans celebrate with ample amounts of food. The Selma Area Food Bank, however is one organization that isn’t getting an ample amount of food, in fact, they have seen a 35 percent drop in donations this year.

“This is certainly not a typical kind of year,” J.D. Parks, director of the Selma Area Food Bank said. “It’s just been tough all year. We’re not getting the food donated.”

The Selma Area Food Bank services Dallas, Wilcox, Perry and Marengo Counties, which are some of the most economically depressed counties in the whole country, Parks said.

“In turn, we’ve gone from 83 active agencies to about 40 in the past year and a half,” Parks said. “The agencies aren’t coming in to get the food, and of course when they do come in, we don’t have much. It’s pretty tough.”

The Selma Area Food Bank can get food from wholesalers as well as from their affiliates at the Montgomery Area Food Bank for a huge discount, which means if the community wants to make an impact on the food bank’s current predicament, donating money would be more affective than donating food, Parks said.

“We generally pay about $.09 handling fee per pound to get the stuff to us (from the Montgomery Area Food Bank), so if somebody were to give us a dollar we could generally get about 11 pounds of food for that. Whereas if you take your dollar and go to the grocery store, you’re going to be lucky if you get one pound of food,” Parks said. “For instance, if you as an individual wanted to help the food bank and said, ‘I’m going to go to the grocery store,’ and buy 10 pounds of food; it’s going to cost you about $20. If you gave me that $20, I could buy with that, 220 pounds of food.”

While all donations are appreciated, Parks said the Selma Area Food Bank needs to be able to buy large quantities of the same things.

“If people have a food drive, and they bring us bags of can goods — that’s all well and good, and I certainly am more than happy to take that, however the majority of the people we deal with are agencies that have anywhere from 40 to 300 [people] who come each month to their place, and you always want to put the same thing in each bag.”

In order to be able to buy bulk items, the food bank needs donations of money, but Parks said he understands that people are sometimes hesitant to donate money.

“They don’t want [the money they donate] to pay utilities and stuff, they want it to go just for food,” Parks said. “Obviously we have utility bills that are pretty hefty — we have a big walk in freezer and a big walk in cooler, but we certainly understand that sometimes people don’t want to give money. They would rather give food, and that’s fine. Just money goes a lot further in getting food.”

Parks said in the past people have sent in checks for $10 or $15 and designated that they wanted the money to be used to buy food.

The lack of donations both in food and money have left the food bank and the agencies they work with, which in Dallas County includes Christian Outreach Alliance, Bosco Nutrition Center, Morning Star Baptist Church, and Green Street Baptist Church among others, needing more.

“Obviously it leaves us [unable] to provide what people would like to get. We get a lot from the local Walmart, and the two local Winn-Dixies are good to us,” Parks said. “[But] we have pallet racks in the back, and believe me they’re empty.”