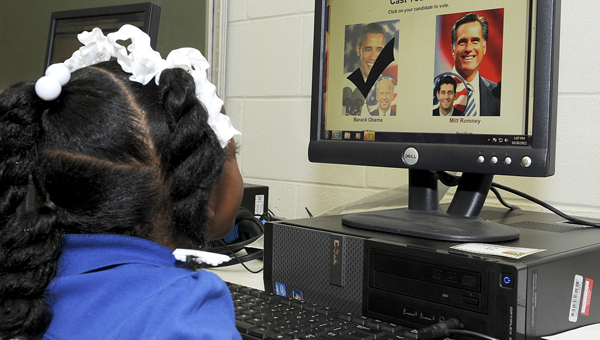 Cedar Park Elementary first grade student, Leah Kimbrough, casts her vote in the Studies Weekly Mock Election 2012 on Tuesday. “We’ve talked about voting,” Kimbrough’s teacher Krystal Dozier said. “I think the real life experiences that children have helps them to learn better — when they can actually see what you’re teaching them.” -- Katie Wood

With the presidential election now one week away, residents around Selma continue to get educated on the candidate’s policies and prepare for the voting process — even if they’re not quite old enough to vote. Kindergarten through fifth grade students at Cedar Park Elementary School participated in a nationwide student election called Every Kid Votes.

“On the count of three, I want everybody to turn and look at your computer, and I want you to cast your ballot,” first grade teacher Krystal Dozier said to her class on Tuesday. “One, two, three … vote.”

Within seconds, 16 first graders cast their vote in the mock presidential election and excitedly waited to receive their very own “I Voted!” sticker.

As they sat on the floor in the computer lab they answered questions from Ms. Dozier.

“Who remembers what day your parents are really going to the poll to vote?” she asked.

“Where is the nearest polling place to our school?” Dozier asked.

“The fire station,” the class said in accord.

Leading up to Tuesday’s mock election, Cedar Park students discussed the different candidates, absentee voting, what a ballot is, how many times people can vote, as well as the hours of the polling places.

“It’s exciting to have [students] be a part of the voting process so early, so they can find out the importance of voting,” Dozier said.

“All the teachers have been very supportive with the mock election. The kids are very excited because this is the first time that our school has ever participated in the mock election process like this, so it’s been very rewarding.”

Smith agreed and said seeing the students use computers to vote also exposes them to technology, which is very exciting.

“I’m excited about getting them involved; maybe if I get my kids involved, maybe they’ll get their parents involved to go out and vote,” Smith said. “[Teaching students about voting and the election process] is important for when they get older. It’s a lifetime skill. When they turn 18, they’ll be able to vote and they’ll know the importance of voting, because we’re starting them out at a young age.”

The mock election gave 197 students at Cedar Park a hands-on opportunity to learn about the election process, which is something principal Bertram Pickney was excited about.

“We teach academics in content area, but we also want content to come alive, because there’s a purpose for schooling, and there’s an application of knowledge. That’s what we are stressing – exposure and application of knowledge,” Pickney said. “What better way to demonstrate that and for our kids to have hands on [experience] than to participate in a mock election, which is a foundation of this country.”

To see how kids across the nation voted in the mock election on Oct. 30, log onto www.studiesweekly.com/vote/results.php.

Proposed YMCA lodging fee plan has worked in other…