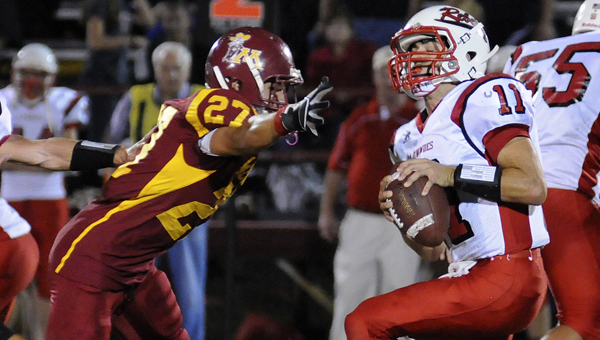 Morgan’s Samir Freij (27) tries to wrap up Lowndes Academy quarterback Cody Harrell during Thursday’s game at home. Morgan fell 18-6 to close out the season on a 7-game skid. -- Tim Reeves

Morgan Academy head football coach Bob Taylor didn’t want the 2012 season to be a rebuilding year. Some thought it would be based on the team’s youth. But for Taylor, who saw eighth graders and freshmen see time as starters and key role players this season, a rebuilding season is exactly what he got.

The 2012 season came to an end Thursday night at Senator Field with the Senators falling to area rival Lowndes Academy 18-6. It marked Morgan’s seventh straight loss to end the season and gave them an overall record of 3-7.

For Taylor, next season begins right away.

Thursday night, the two rivals played to a tough draw in the first half, but it was the Rebels of Lowndes Academy who came out of the locker room ready to play.

“We were just not able to get into the right plays, get going on offense,” Taylor said. “I’ll give Lowndes all the credit. They played extremely well and came out in the second half and played far better then we did.”

With the win, the Rebels improved to 5-5 on the season.

Lowndes first score of the game came with 10:24 left in the third quarter when quarterback Cody Harrell found Garrett Headley on a wide receiver screen to the left side. Headly broke one tackle and then outraced the Morgan defense for the opening score. The extra point attempt failed, leaving the score 6-0.

After recovering a fumble at the Morgan 25-yard line just three plays later, the Rebels marched down the field for a touchdown with 6:49 left to go in the quarter. This time, Harrell broke through would-be tacklers en route to a 9-yard touchdown run. Again, the extra point attempt failed, giving Lowndes a 12-0 lead.

Lowndes would round out their scoring, when they again took possession after a Morgan fumble, and went 46-yards on 10 plays for a touchdown. Toby King rounded out the drive, when he raced in from four yards out with 47 seconds left in the third.

The 2-point attempt failed, leaving the score at 18-0.

Morgan would finally get on the board on the very last play of the game, when running back Trevor Bates tip toed down the right sideline for a 30-yard touchdown run as time expired.

Morgan’s Bates and Jamie Bearden led all rushers, racking up 75 yards each. King led the way for Lowndes with 72 yards on the ground.