Area cotton farmers in the midst of tremendous season 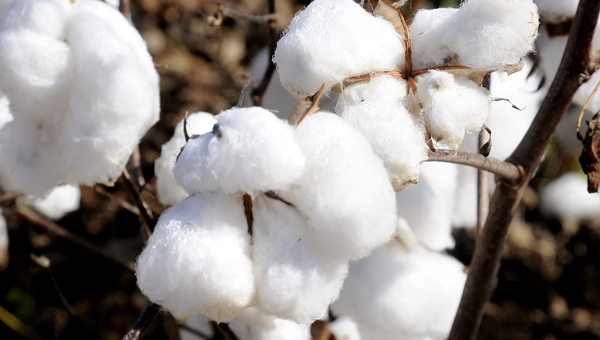 Local cotton farmers are saying the current cotton season is looking to be one of the best in Dallas County in “quite a long time.” Dallas County and portions of South Alabama make up as much as 60 percent of the overall cotton production in the state each year. -- Sarah Cook

Driving the roads of Dallas County, it’s hard to miss the many fields overflowing with snowy, white cotton.

October marks the month of cotton harvest, and for most local farmers, this has been a very rewarding year.

“This is probably going to be the highest yielding cotton crop that Dallas County has seen in quite a long time,” said Jay Minter, manager of farming operations at J.A. Minter and Son Cotton in Tyler.

Minter comes from a long line of cotton farmers, as he is the sixth generation Minter to grow cotton. He said this year heavy rains throughout the summer and early September, along with mild temperatures contributed to a good crop.

“Rain was the biggest help in us having a good crop this year,” Minter said, who has 1,300 acres of cotton on his farm and 460 acres of peanuts. “Another one was that we didn’t have extreme heat this summer.”

Cotton, being a warm-weather crop, grows best in warm-climate regions that have long summers, Minter said. Planting usually occurs during late spring and harvesting in October.

“This year we’ll definitely be harvesting into November though,” Minter said. “The better [the crop] is, the slower the picking process goes and the more pickers you need to unload the cotton and make the modules — it’s a great problem to have.”

Buddy Adamson, cotton division director for the Alabama Farmers Federation, said areas in south Alabama, like Dallas County, usually account for 50 to 60 percent of the overall crop yield for the state.

He also agreed with Minter and said this year farmers experienced a high yielding crop, which most weren’t expecting.

“I think overall when you look at the whole state, farmers probably ended up with a better crop than what they first thought it was going to be,” Adamson said. “We’re not very far into the picking season, but the yields have been from a few hundred pounds all the way to a couple of bales or more.”

One bale of cotton is equal to roughly 500 pounds, he said.

According to the Alabama Farmer’s Federation, cotton is grown in 59 of Alabama’s 67 counties.

Although Dallas County is predominantly a tree-growing area with “pockets of farming,” Minter said cotton has been grown in this area since early statehood.

“It was the heart of the community,” Minter said of the early cotton industry in Dallas County.

Today, Alabama ranks as the ninth state with highest yields in cotton, Minter said, and its years like this that he feels most fortunate to be in the cotton growing industry.

“It takes a lot of things going right to have a good crop,” he said. “I feel like God is looking out for me during years like this. Seeing a good rain in the middle of summer and seeing a beautiful crop come in — it makes it all worth it.”

African masks made of assorted materials and artifacts that tell of a time long ago are now on display at... read more