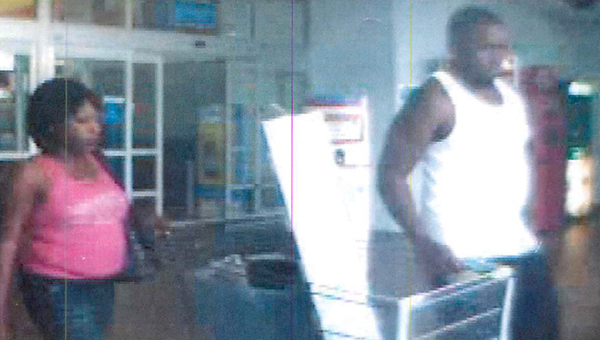 On camera: In a surveillance photograph taken by Walmart security cameras, provided by the Selma Police Department, Veronica D. WIlliams and Kennetrick Hall are seen leaving with merchandise allegedly purchased with a stolen credit card. Both have been arrested and charged with theft of lost property and fraudulent use of a credit card.

Veronica D. Williams was arrested just days after she and another individual went shopping at Walmart thanks to the use of a credit card they had allegedly stolen. Thursday, the second member of that shopping team was taken into custody.

Selma Chief of Police William T. Riley said Friday that Kennetrick Hall was arrested and charged with theft of lost property, three counts of fraudulent use of a credit card and placed in the Dallas County Jail under a $51,000 bond.

On Saturday, Sept. 29, an individual returned to the Selma Hardees, where he had enjoyed breakfast, but left his wallet. When he returned, he could not find the wallet and restaurant employees said no one had turned in a found wallet.

When the individual attempted to cancel their cards, they were told one of the cards had been used to make purchases at the Selma Walmart.

The individual then contacted the Selma Police Department, providing details on the purchases at Walmart and providing an inventory of the wallet that contained credit cards and $350 in cash.

“During the investigation, detectives were able to obtain video footage from Walmart,” Riley said during an earlier interview with the Times-Journal. “The footage showed suspects swiping the victim’s card and signing a receipt and leaving the store with the merchandise.”

Riley said the suspects were seen leaving with a 32-inch television and other items. Riley said the total of the amounts purchased were $450.07.

Neither of the suspects are in the Dallas County Jail. Williams posted bond on Oct. 3, and Hall posted bond Thursday.

Nine paddlers pose with Mayor Evans at Selma’s Market Day on Saturday before they embarked on a week long paddle... read more