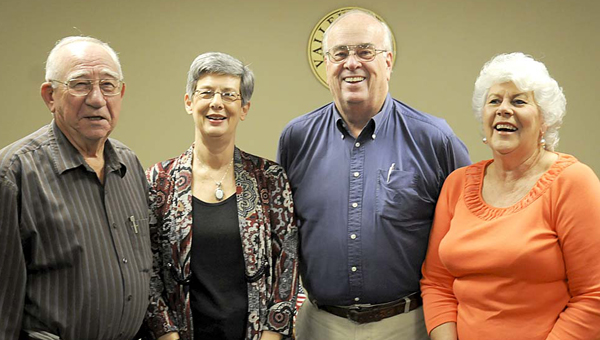 During their last city council meeting in leadership roles, (left to right), Gene Middlebrooks, Libby Ezelle, Mayor Tom Lee and Patsy Moore all share a smile together and celebrate their acomplishments while serving the city of Valley Grande. -- Sarah Cook

VALLEY GRANDE — There was a tone of sadness and joy Monday night as the Valley Grande City Council adjourned its last meeting under the leadership of Mayor Tom Lee. Of the six council representatives, Donna Downs will be the only returning member.

Lee said as his eight years serving as mayor come to a close, he feels that Valley Grande has made great strides as a city and accomplished many goals.

“The progress that has been made here was made by people who were willing to work together,” Lee said. “You want to look forward for the new council but you also want to look back and see the accomplishments and feel good about it.”

He added that he felt that one of his greatest accomplishments as mayor was the construction of the Valley Grande baseball fields.

“You can see the kids out there now from all over the city and county actually coming to play on the Valley Grande ball field,” he said.

During his two terms, Lee and his council also accomplished the construction of a walking trail, two firehouses and a city hall.

“We also got our tax base established,” he said. “We pretty much did everything that puts us on solid financial grounds.”

One goal that wasn’t met was the development of a senior retirement community, Lee said. But he believes the next council has the ability to accomplish this.

“The master plan is in place for that, it’s just a matter of private developers wanting to do it,” he said.

Other council members expressed their feelings of leaving their post, saying, “we have become family.”

Patsy Moore added, “I’m going to miss everyone. Thank you for voting me as one of the first council members, I appreciate that.”

As for Lee, he said he will miss serving as mayor, but is looking forward to some down time.

Sunday morning a convicted murderer walked out of the Limestone Correctional Center and headed to his new home in Boaz.... read more