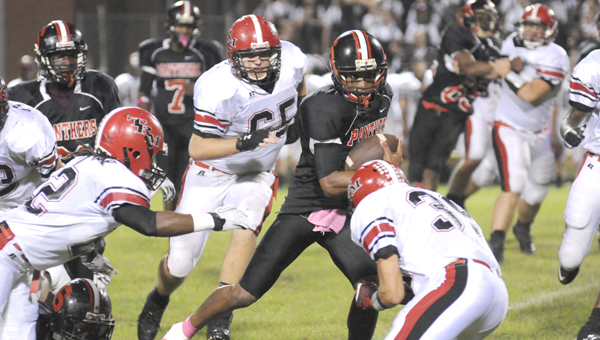 Southside’s Derick Daniels looks for room to run during Friday’s homecoming game against T.R. Miller. Daniels scored twice, once running and once receiving, in the loss. -- Robert Hudson

In a game that was tight for about a half, the No. 2 T.R. Miller Tigers pulled away for a 48-18 win over the Southside Panthers on homecoming in a region game on Friday.

Panthers head football coach Daniel Flowers said his team fought hard early, and he was glad to see they kept fighting even when they got down.

“For that first quarter and a half, we fought toe to toe with those guys — it was 13-6 with six minutes left in the second quarter, then they show us why they’re the No. 2 team when they scored three touchdowns in five minutes, and that blew the game open,” Flowers said. “One thing I did see improvement on was our guys didn’t quit in the second half. They kept fighting and that’s positive. Not all losses are losses. You want to win the small battles. I think tonight we finally finished a game out of the whole season. I feel if we take this to next week and the following week, we’ve got a lot to look up to.”

The Tigers (7-0, 4-0 Class 3A-Region 1) struck first early, as Dominique Jackson capped off the team’s first drive with a 7-yard touchdown run, and the extra pont by Trey Salter made it 7-0 with 3:30 left in the opening quarter.

Southside (1-6, 1-4 Class 3A-Region 1) responded on its very next possession when quarterback Khamari Gibbs found Derick Daniels, who then broke a pair of Tiger tackles and scored on a 50-yard touchdown. The Panthers missed the 2-point conversion to make the score 7-6 with 8:00 left in the first half.

The Tigers answered right back on the next drive, marching 61-yards down the field and scoring on a 2-yard touchdown run by Kameron Coleman that made the score 13-6 with 5:11 left in the first half.

After forcing a Southside punt, T.R. Miller scored again, this time on a 25-yard touchdown run by Jackson that made it a 20-7 game after the extra point with 3:55 left in the half.

The Tigers added one more touchdown in the half, as quarterback Kevin Davis found Coleman as time expired for a 26-yard touchdown pass that made the score 27-6 at halftime.

Davis threw a 44-yard touchdown pass to Keion Smith on the first play of the second half that extended the Tigers’ lead to 34-6.

Southside’s other touchdown came on a 9-yard pass from Gibbs to Patrick Harris that made the score 41-12 with 11:44 left in the game.

Southside scored once more in the game, as Daniels broke down the right sideline for a 65-yard touchdown run with 2:08 left in the game.

The Panthers will take the field again Friday at Excel in a region game.