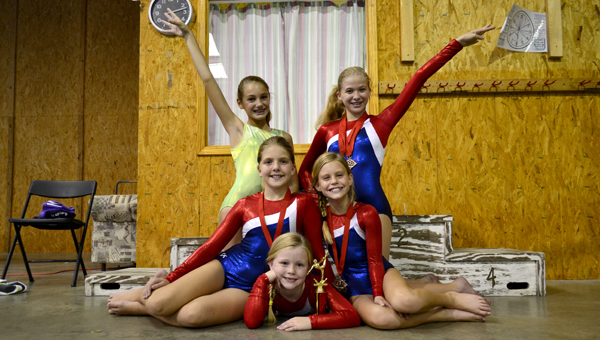 Dixie Flips Gymnastics competed in their second meet of the season, held recently in Montgomery at United Gymstars where they competed against nine other gymnastics teams.

The star of the meet was level three gymnast Sarah Lloyd Free, who competed in the Junior A Division. Free placed first on vault with a 9.6, second on bars with a 9.15, second on beam with a 9.15, and sixth on floor with an 8.85. Free was the all around first place champion with a total of 36.750 out of a possible 40 points.

Camryn Baggett also did well competing in level three in the Senior Division placing sixth on vault, fourth on bars, eleventh on beam, eighth on floor, and ninth all around.

Adams, in the Senior A Division, placed tenth on vault, seventh on bars, tenth on beam, eighth on floor and ninth all around.

In the Senior B Division Colley placed sixth on vault, fourth on bars, fifth on beam, sixth on floor and fifth all around.

Natalie Oslund, the only level five gymnast, placed tenth on vault, eleventh on bars, tenth on beam, eleventh on floor and tenth all around.

“I was very pleased with the overall improvement in the individual scores, but there’s always room for improvement,” said Dixie Flips coach Tracey Craig. “The girls will have intense practices focusing on the various techniques for the next meet which will be Oct. 20 in Tuscaloosa.”