Female Athlete of the Week: Harris a force at the net for Selma 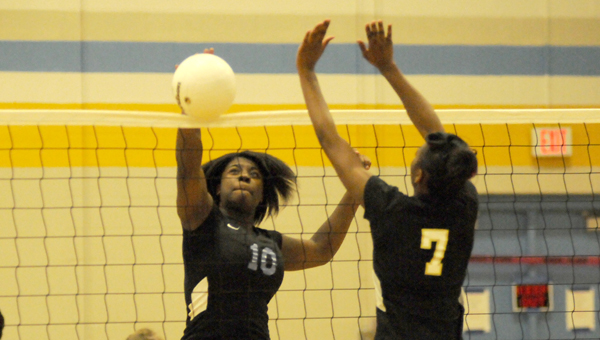 Selma’s T’Keyah Harris (10) spikes the ball during a match against Greenville on Thursday. -- Robert Hudson

In helping her team to a win during Thursday’s tri-match at home, T’Keyah Harris is the female athlete of the week.

Harris had four kills and two blocks at the net during the Lady Saints’ 3-0 win over Greenville.

As one of Selma High’s front row players on the court, Harris said it’s her job to attack and cover anything that goes at the net.

“My role on the team is to block and spike,” Harris said. “Also, when they’re tipping, my job is to cover the tips.”

While the Lady Saints fell in their second game of the match on Thursday, Harris could be seen as one of Selma’s players on the court diving and fighting to return every ball that the opponent put over the net.

Even when she was hurt doing just that, her will to win kept her fighting.

“I was hurt, but I put in all my energy to go after everything ,” Harris said. “I try to sacrifice because I want to win.”

Game of the Week: Tenth-ranked Keith hosting Billingsley in battle of the Bears

Keith defenders wrap up a Southside running back during last Friday’s meeting between the two rivals. Keith hosts Billingsley on... read more